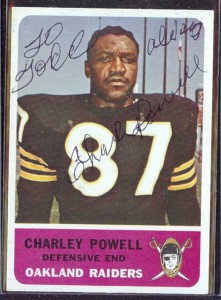 The San Diego Union-Tribune recently took on the monumental task of reviewing the greatest prep football players in county history and putting together 1st-3rd teams.  Like recently discussion on this site between Jerry Rice and Lance Alworth, this task would be an incredible challenge because the athletes in question played over the span of nearly 100 years.  However, the squad that put these lists together did a very respectable job in highlighting players from nearly 10 decades of high school football.

One thing that jumped out to me while reviewing these lists was the number of players with AFL connections.  There were several, and their connections to the American Football League are as follows:

Tom Dahms – After spending seven seasons as a player in the NFL, Dahms was a longtime Oakland Raiders defensive line coach.

Dave Grayson – AFL All-Time First Team member after a stellar career as defensive back with the Dallas Texans/Kansas City Chiefs and Oakland Raiders.

Volney Peters – Played seasons with the Los Angeles Chargers and Oakland Raiders after several seasons as a defensive lineman in the NFL.

Art Powell – A fantastic receiver with the New York Titans and Oakland Raiders before wrapping up his AFL time with the Buffalo Bills.

Charlie Powell – Older brother of Art, and a defensive lineman with the Oakland Raiders.  A special article was written about Charlie, who was one of the greatest athletes that you have probably never heard of.  Take a look at THIS.

Willie West – A fine defensive back who starred with the Buffalo Bills, Denver Broncos, New York Jets and Miami Dolphins.

You can find the full article and list HERE.  Rick Smith, one of our regular readers, was a member of the panel that selected these teams.  Perhaps he can give a bit of insight into what role, if any, the AFL played in the discussions surrounding these players, and if there were other former AFL players that did not make the final cuts.