I received a telephone call today from Lance Alworth.  He called to tell me that he enjoyed reading today’s post, which was an interview that we had done some 15 years before, talking about his former head coach, Sid Gillman.  He also asked if we could better explain a line from the interview.  Here is what Lance had to say… 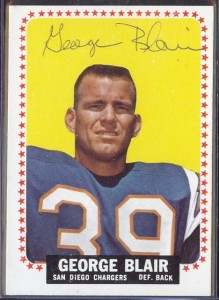 I read Todd’s post today with the interview that we did back in 1998.  Sid was truly an innovative coach.

One thing jumped out at me from the interview, and I wanted to better explain something I had said, as I would hate for it to be misconstrued.  At one point we were discussing the kicker on our 1963 championship team, and I had said that a great kicker was the one thing that our team lacked.  In fact, George Blair was our kicker and he was fantastic.  George led the AFL in field goal percentage in 1962 and 1963, before an injury ended his career prematurely.

What I had meant was that as George was a drop-back kicker, as were all other kickers at that time, and as such, we didn’t have the 50+ yard field goal threat that teams do today with the soccer-style kicking that became popular shortly after George retired.

My apologies to George, a great kicker and teammate!