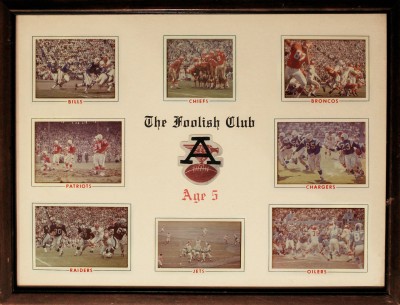 I’ve been involved in sports memorabilia for my entire life.  I got my first box of bubble gum cards from my father at the age of five, and I have been collecting ever since.  Over the years I built an impressive collection of American Football League-related memorabilia that was very important to me.

If you’ve been reading this blog for long, you know that in the Summer of 2014, I consigned a large portion of that collection to an auction house in an effort to raise funds to open a business based on my other passion – lacrosse.  In essence I tried to use one passion to help fuel another.  Unfortunately, my dreams did not come to fruition, and the area where I live is without the lacrosse store that would have so benefitted our community.

There were several ways that I could have parted with my collection, but I decided to consign with a new auction house that is run by friends.  They are a trustworthy group who has been an asset to the collecting community for many years via direct sales, and recently decided to open a similarly-honorable auction house.  That group is BST Auctions, and their first auction is now open to the public.

BST’s Spring 2015 auction is loaded with high-quality AFL memorabilia (admittedly, a good portion of which came from my collections).  Many of the items have been written about in Tales from the AFL.

I will admit that it is difficult to see so many of my once-treasured pieces now up for sale.  But a good collecting friend of mine once told me that we do not own the pieces in our collections.  We merely hold onto them until the next person comes around.  It comforts me to know that another collector will be able to enjoy them, and with any luck, will try to share them with all AFL fans as I did with this site.