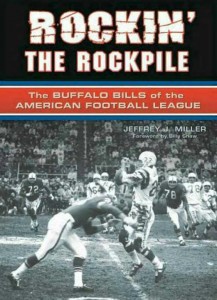 One of the joys of being an AFL historian is connecting with my contemporaries across the country.  Thankfully for us all, there are many fans of the American Football League who do their part to document the league’s history and make it available for us all.  Jeffrey Miller is one of those men.  Raised in the Buffalo area, Jeff is a football historian of teams in that region, most notably, the Bills.  His Rockin’ the Rockpile, is the most in-depth study of the 1960s Buffalo Bills that I have ever found, and a must-read for AFL fans.  Miller is also the author of three more books, 100 Things Bills Fans Should Know & Do Before They Die; Game Changers: The Greatest Plays in Buffalo Bills Football History, which he wrote co-wrote with Marv Levy; and Buffalo’s Forgotten Champions.

In August of 2011, Jeff Miller put together a Facebook fan page called, appropriately, Rockin’ the Rockpile, which has become a fantastic photo archive of all things 1960s Buffalo Bills.  Trading cards, game photos, new articles, video clips, and many behind-the-scenes images from players’ personal collections are available for fans to enjoy.

Jeff and I have been in communication now for several years, and he recently sat down to answer a few questions about what he is up to, and how he is doing his part to document AFL history.

Q – What got you started in researching the AFL’s Buffalo Bills?

A – While writing my first football book, “Buffalo’s Forgotten Champions,” I got to be good friends with Denny Lynch, who was the Bills’ archivist at the time (2004).  Denny suggested I write something about the Bills, because at that time there weren’t many books on the team.  I had originally wanted to write a book focusing on jus the championship teams of ’64 and ’65, but Denny suggested I write about the entire AFL era.  Good call!  But the truth is I have always been a fan and collector of the AFL Bills, since that was the era of my youth.

Q – Can you talk about the process a bit?

A – Tracking guys down was the biggest challenge, besides finding a publisher.  Several of them still lived in Western New York, but there were many scattered across the country.  I wanted to make this book the definitive history of the Bills’ AFL era, combining the elements of a collective biography of the players with encyclopedic elements that would make it also work as a reference book.  I set it up in chronological order, which seemed to make the most sense, of course, but since this story was intended to be told from the players’ points of view, I thought it would be nice to have them each sort of introduce themselves and talk about how they came to Buffalo.  That would lead into the season-by-season narrative.  At the end, the players would talk about what they have done since leaving the playing field.  Then the stats, records, drafts, demographics, and so on.

Q – What was the response of the Bills players?  How were they to work with?

A – I was able to interview more than 60 players, coaches and support personnel, and nearly everyone was fantastic.  Only three declined.  The players who still live in Western New York were very accessible, and many sat for multiple interviews.  Al Bemiller had me over to his house several times, including one time for beers when his brother-in-law Dick Cunningham, another former Bill, was visiting.  Heard lots of great behind-the-scenes stories that night!  Ed Rutkowski, Ernie Warlick, Bob Schmidt, Booker Edgerson, Charley Ferguson … all great guys.  Ed Rutkowski hooked me up with Jack Kemp, who was terrific!  I was able to interview Jack three times over the phone.  I was shocked to find Billy Shaw’s number in the phone book.  A hall-of-famer in the phone book!  And he was great.  I interviewed him two or three times, and when I asked him to write the foreword for the book, I think he was truly touched.  It was funny to talk to guys like Paul Costa, Joe O’Donnell and Howard Kindig, because they were all very close friends during their playing days and would tell me stories about each other.  Then when I would talk to one of the others, they would either deny or embellish the story—hysterical stuff too.  Paul, who is now an ordained minister, told me that Kindig’s nickname on the Bills was “Oh Shit.”  When I asked why, he said, “Because whenever he’d snap the football for punts or field goals, no one knew where it would go, so we’d all duck and say, ‘Oh, shit!’”  Perhaps the most informative guy was Eddie Abramoski, who was the Bills trainer from their inception until 1996.  He was a walking encyclopedia of Bills information, and sat for three interviews (and picked up the tab for two lunches!) and numerous phone calls.

Q – What was something that you learned in your research that most surprised you?

A – That these were regular guys who held “real” jobs in addition to their football careers, like selling cars, teaching school, working construction.  Bemiller and Ron McDole had a construction company.  Tom Sestak and Paul Maguire had a popular bar.  Ernie Warlick owned a hamburger joint.  Costa and O’Donnell owned a beer distributorship.  Most did not make enough to retire on and had to go into another line work after their playing days were over.  But most are not resentful of the money players are making now—they actually think it’s great.  Retirements and health issues are another story …

Q – You have now written four books about professional football in Buffalo, ranging from the 1920s through relatively current times. As someone who has never been to Buffalo, what would you hope that I (or other readers) would come away with after reading your work?

A – That Buffalo is a great football town with an incredible fan base.  There is a strong link between the team and the community.  Fans look back at the AFL era as the golden age of sport in this town, but to truly understand what we are all about, one has to look no farther than the four Super Bowl losses.  I think that occurrence is symbolic of the city and its love affair with the team.  They don’t get the respect they deserve for such an amazing accomplishment, but will forever bear the inferiority complex that comes with the perceived futility that came along with losing four straight.  They were the best team in the NFL over that four year stretch, but all people seem to remember is the four losses.

Q – I have found the 1960s Buffalo Bills (especially 1964-65) to be an exceptionally popular team. For a rather small town, what do you think makes these teams so popular among fans even today?

A – They were a true reflection of the city—blue collar, hard-working, community-oriented.  They were winners, and they were accessible.  You talk to people who lived here during that era, and you hear stories about how they had beers with Paul Maguire or Ron McDole, or that they lived next door to Harry Jacobs or Tom Sestak, or that Haven Moses was their substitute gym teacher in school, and that these were great guys.

Q – You have a great fan page for Rockin’ the Rockpile on Facebook. What are your goals for the page? How has the response been?

A – The response has been terrific!  I just want to have a place where fans can see some great old pictures and clips, and share their memories and experiences.  You’re right that the team remains very popular—it was the only major league sports team in the city’s history to win a championship.  And they did it twice!!  How could we NOT love them?