An Interview with Buzz Ponce – Author of Finding Frank; Full Circle in a Life Cut Short

An Interview with Buzz Ponce – Author of Finding Frank; Full Circle in a Life Cut Short 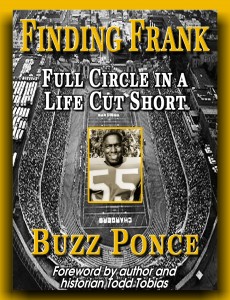 In recent weeks we have been treated to excerpts from an upcoming book on former San Diego Chargers and Cincinnati Bengals linebacker, Frank Buncom.  Author Buzz Ponce has been working diligently this past year to put Buncom’s story together.  This week the eBook version of Finding Frank; Full circle in a Life Cut Short, went online, and became available for purchase (just click the link in the title to be taken directly to the sales page).

Yesterday, Ponce took time to answer some questions about his journey, originally with Buncom, and more recently, with his book.

AFL – What was it about Frank Buncom that captured your attention as a ball boy?

BP – As I wrote in the book, I first met Frank in 1965 – a long time ago – but I remember the day and the situation like it was just yesterday. He arrived in training camp on my first day as a ball boy and he sort of signaled me out, asking me in a real fun way to help him with his luggage. He had that great smile of his and I just felt that — above being a football player — he was someone very special, someone I really wanted to get to know. In the four short years that I knew him, that specialness grew and his uniqueness became more and more apparent.

AFL – Frank Buncom died 44 years ago. How many people really remember him today?

BP – Sadly, not many people remember Frank. Certainly his family does, and they are deservedly very proud of his accomplishments. But if you were to ask the average Chargers fan today who the original number 55 for the team was, most would draw a blank. I guess that would be understandable if he had been just a so-so player. But in his era, he was one of the best linebackers in the game – AFL or NFL. He’s also in the team’s Hall of Fame, as you know.      It’s always been curious to me why he was seemingly forgotten so quickly. Part of that no doubt, is that he really did his best to stay out of the limelight as a player. And as I describe in the book, he wasn’t a Hollywood-type of a guy and certainly never a publicity hound.

AFL – Buncom wasn’t a huge star in the AFL, but he did make three All Star teams in the seven years that he played. Why wasn’t he better known?

BP – Again, he never touted his own accomplishments and always preferred to stay in the background, letting other people get all of the acclaim.      And remember, Buncom was a key cog during their Chargers’ best-ever seasons – 1962 through ’67. That makes it even more curious as to why he is not more applauded and appreciated. Or maybe, that helps explain his anonymity – he was overshadowed by marquee names.

But as is profiled in the book, his favorite literary character was Cyrano de Bergerac who eschewed publicity. Frank followed that lead very well.

AFL – How long would Buncom have continued playing if he had not died so young?

BP – Frank would have played probably for another few years. He was just 29 when he died and he was relatively injury-free for most of his playing years. But he did have a knee injury which led to the fatal pulmonary embolism in 1969. He had mentioned to me several times in his last year that he enjoyed playing for Paul Brown in Cincinnati and looked forward to helping the Bengals become a contender.

Assuming he continued to play mostly injury-free, I’m guessing he would have retired in ’72 or ’73. That would have made it a 10 or11 year career – not bad for a linebacker in pro football, then or now.

AFL – Had he lived, what were Buncom’s plans following his playing career?

BP – Frank talked a lot about becoming a high school football coach following his playing career. He loved being around kids and that would have been a perfect fit for him. He wanted to move back to San Diego and join his wife as a teacher in the San Diego Unified School District.

AFL – Buncom is in the San Diego Chargers’ Hall of Fame. Was that strictly a posthumous honor, or did he gain entry because of his playing skills?

BP – That’s a great question – one fraught with controversy even today, some 36 years after the Chargers first established their Hall of Fame. The fact is all original four inductees – Buncom, Bob Laraba, Emil Karas, and Jacque MacKinnon – were deceased when inducted. Since that first year, all future inductees were very well alive when enshrined.

Common sense seems to indicate that the first four were honored certainly in part, because of their early deaths. But then another argument would strongly suggest that Buncom and Karas were given the honor also based on their skills on the field. Both were great linebackers and most probably – I like to think, anyway – would have made the Chargers HoF in any case.

AFL – If he had played for a few more years, did Buncom have an outside chance of landing on the all-time All-AFL team?

BP – That’s another stumper. I certainly am biased in my beliefs in this question and because of his early death, we will never know. But Frank was an elite linebacker for seven years and may have made at least one more All Star team had he continued playing. So let’s play “what if” and say he played 10 seasons and made four All Star teams in that span.

If that was the case, then a strong argument could be made, I think, that he would deserve status as an AFL great.

And don’t forget — although everyone does – that he won MVP honors as the defensive player of the All Star game in 1966.

AFL – From start to finish, how long did it take you to write Finding Frank?

BP – It took 44 years and as I say in the book, I take no pride in that. Shortly after Frank died I made a promise to capture his life and times in book form. But I was just 20 years-old when he died, so what did I know? It was a struggle finding the time and resources necessary to fully commit to the project. But once I retired in 2011, I knew what I wanted to do.

AFL – Of all the people you interviewed about Frank Buncom, who provided some of the best stories and details?

BP – Bob Hood, my former ball boy chief, was a master story-teller when we met some 47 after first knowing each other. Bob provided the missing link in setting up the first meeting with the Buncom family and filled in many missing gaps on remembering Frank.

Ron Mix also was very helpful in some early research and I’m grateful that he was able to spend several hours with me in San Diego.

And of course the Buncom family – especially Sheila Buncom – was very encouraging and helpful in gathering information.

AFL – What was the most interesting part of writing the book?

BP – Without a doubt, the afternoon I spent meeting and talking to the Buncom family will always be a highlight in my life.  I had waited so long to meet Frank’s family, that when the day finally arrived, I truly had to pinch myself to make sure it was real. When I walked into Bob Hood’s home that day and saw Frank Buncom III and IV standing there, it was a very surreal moment.

AFL – What was the most disappointing aspect of writing Finding Frank?

BP – Other than the length of time it took to write, there were no disappointments. This was a wonderful experience and I’m grateful I was able to get it done. I’m just very hopeful that I did Frank justice and captured the essence of the man.

The fact that it took so long to finally write the book is certainly a disappointment. It shouldn’t take 44 years to do anything. But there were real reasons for the delays which I think I mention in the book.

AFL – You interviewed a long list of people, including former teammates, for this book. Does anyone particular interview standout as special?

BP – When I was a ball boy I was in awe of Ron Mix and meeting him 47 years later didn’t change that. Because of his stature – not just as a Hall of Fame player – but as a noted author and attorney — I was a little intimidated I suppose, when we met for lunch in 2012. But he made me feel very at ease and had some incredible stories about the AFL and his playing days. And he had some great insights into the game today, as well.

AFL – What is Frank Buncom’s legacy?

BP – The way I remember and know Buncom’s legacy is biased – I admit. But then, so many people were not able to witness and appreciate the man’s uniqueness. I hope the book at least opens a window to how he lived and how he conducted his life; we all could learn from that.      If his family – his son, daughter-in-law, grandchildren – are any indication, his legacy is firm and solid. He is remembered as he should be — as a great inspiration.

AFL – What are your hopes for the book?

BP – My hope from the very beginning has always been nothing more than to chart and document the most profound person I have ever known. I hope I’ve done that and I hope that if he could, Frank would simply say, “Well done…”

AFL – What was your biggest surprise in the whole process?

BP – By far the biggest surprise was finding out how much I enjoyed the process – once I was truly able to dive into it and give it my full attention. Sometimes the writing would just flow, other times the going was cumbersome, but overall, it was a great experience.

And too, I believe I validated my hope – which was not a surprise. The hope being that the Frank Buncom I would find after a year of research was the same Frank that I remembered from those many years ago.