An Interview with the Chargers’ Chuck Allen

An Interview with the Chargers’ Chuck Allen

A weekend honoring Sid Gillman was held in San Diego in August, 2000.  I was like a kid in a candy store.  I managed to attend two of the events, one being an evening dinner, and the other a golf tournament.  It was the first time that I was able to meet in person many of the 1960s Chargers greats, including Jack Kemp, Ernie Ladd, Dave Kocourek and many more.

I attended the golf tournament, held in Poway, on a flawless Southern California day, armed with my digital recorder and interview questions.  I was trying to make connections with as many former players as possible, to set up interviews for my book, Charging Through the AFL.  One of the many men that I spoke with that afternoon was former Chargers linebacker, Chuck Allen.  Allen came to the Chargers in 1961, and though often overshadowed by the massive presence of the “Fearsome Foursome” (Ernie Ladd, Earl Faison, Ron Nery and Bill Hudson), was a solid performer at linebacker thorough the 1969 season.  A two-time AFL all-star, Allen was inducted into the Chargers Hall of Fame in 1984.

We conducted the following interview on that August day, nearly 13 years ago. 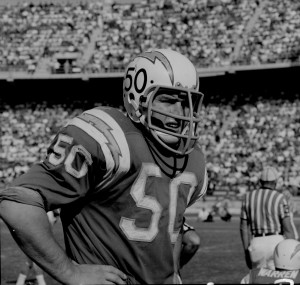 AFL – Tell me about who scouted you and how you came to the Chargers.

CA – Well, I think Jack Faulkner and Chuck Noll and Al Davis, Joe Madro, all the coaches were there at the time.  I was fortunate enough to play in a couple Rose Bowls with the Huskies, so they saw me there.  They came up after the second Rose Bowl in 1961 that was in January, and mentioned that they were with the Chargers, would I be interested in playing.  From that point on, everything just fell into place.  I had a couple other opportunities, but it was pretty intimidating to go to the Rams when they had Myron Patios, Les Richter and, who was the other great All-Pro?  Anyway, Saskatchewan didn’t appeal to me, but San Diego sure looked great.  It was an easy choice.

AFL – Did you have any worries about the league folding at that time?

CA – No, I was too young.  I didn’t know that much about it, but they seemed very sincere about it and they were willing to pay the top dollar.  They matched everything that the Rams or Saskatchewan had.  I didn’t want to go up and take Canadian money at the time.  But they were great about it, said the opportunity would be there and I think they sold a lot of people on it because look at the players that we put together that first year in 1961 in San Diego.  And they had played the year before in L.A., you know, but San Diego just really appealed to me.

AFL – What advantages do you think you had playing for the Chargers and Sid Gillman?

CA – You have got the master coach there.  He pulled everything together, he knew organization, his assistants were all knowledgeable.  Jack Faulkner was the defensive coordinator.  And of course I’m looking at it from the defensive standpoint, but he had Al Davis, wide receiver coach, Chuck Noll was their defensive linebacker coach, secondary coach.  We just had a great staff and their reputation was there.  And it looked like if the league caught on at that time we knew we were going to be doing real well.  And we did.

AFL – How much did you deal with Sid?

CA – Well I dealt with him on contracts.  That was the worst part.  Don’t have to say too much more about that.  He’s legendary in that area too.  But you know what?  This guy had a tremendous heart and we were counting the years that some of us were together with our wives, we were married, most of us in San Diego.  We had at our table, it was Ernie Ladd, Earl Faison, Paul Lowe, we had almost 200 years of married life.  My wife and I have been married forty years and most of my friends, Mitinger has been married for almost 40 and Bud Whitehead, he’s at 38or 37.  But we all hung together and we had a great group of guys.  Everybody got along pretty darn well with one another.  Now that’s part of the chemistry that created some outstanding Charger teams there.

AFL – How was old Balboa Stadium and the fans in the stadium?

CA – Loved it.  I’ll tell you, the San Diego fans, from the very beginning, took us to heart.  They loved us, they supported us, they filled Balboa Stadium.  They had to increase the seating there until they could finally put through the new stadium, which came in ’66 or ’67.  Jack Murphy Stadium.  It was just so much fun playing for the fans that loved the game as much as we did.  We played for the love of the game.  That’s about true.  Nobody made a whole lot of money in those days and we all basically had off-season jobs to help sustain us.  It was almost like a vacation for my wife and I.  We had three children down here.  It was a growing up experience.  It was very conducive to raising a family at that time.  It’s gotten a little bigger since then, I’ve noticed in this reunion situation that we’ve had.  But it’s been a lot of fun.

CA – Oh well, it’s hard to differentiate.  You’re looking at Niagara Falls and some of the great stories there.  There’s a lot of them that I can’t tell you.  We were back in Buffalo at Bear Mountain.  We loved Bear Mountain.  That’s a good clean one too, that I can tell you all about.  We had upstate New York we visited West Point.  I think myself, coming from a small town of 1,500 people in the state of Washington, I went to the University of Washington.  We went back to Ohio State where there was 80-100,000 people in the stands and we just couldn’t believe it.  But I’d never really been outside the country other than those few football games with the University of Washington.  So for us to travel to different parts of the country, everything was new and exciting, especially back east.  I had never seen Boston, the old Patriots in Fenway.  The Jets played in Shea Stadium, Buffalo was in old War Memorial, and it was an experience every time we went somewhere.  And Sid had these interesting road trips for us.  We would up one time in Little Rock, Arkansas.  There’s so many things.  While I’m talking to you, it’s tough to pullout those things, but it was so much fun and it really made us stick together as a team.  We played together, did everything together.  And Rough Acres was the beginning of that.

AFL – I was just going to say, tell me about Rough Acres.

CA – Rough Acres, a lot of memories that you probably want to forget.  Rattlesnakes, hotter than the devil.  We lifted weights out there, couldn’t wait to get out of there.  Ate together, sang together, drank together, played football together, and that’s, I think, one of the reasons why that ’63 Charger team, we felt we were invincible.  We didn’t feel there was anybody that could beat us.  We lost a couple games, but we shouldn’t have.  I always felt, and I think a lot of people in pro football think that was one of the greatest teams that ever was assembled, the 1963 Charger championship team.

CA – Flattered.  You know, one of the things Sid used to do was have a group of underprivileged children, a lot of times mentally handicapped or physically handicapped kids come to training camp.  He’d call us all together in a huddle before and he said, “You know, you people are the luckiest people on earth to play this game.”  And that’s one of the things that he instilled in us.  This is the greatest game on earth, and it really is.  But he said, “You have this great talent and you should get down on your knees and thank God every day because you are able to exhibit this and you are able to do this.”  And he says, “These poor kids, they idolize you and I want all of you to go over there and shake their hands, give them a hug as you leave practice.”  And we did.  And I’ll tell you, it’s a humbling experience.  I think that put a lot of character in some of the players, because we realize how lucky we really are to do this.

AFL – What did you dislike about being a professional football player?

CA – Travel time, being away from the family, because it takes seven months out of your year, really.  In those days we all had to have off-season jobs.  Nowadays they can work 12 months a year at the sport.  Not too many players, about half of them, maybe lived in San Diego, I don’t think that many.  Most of us went home because we had to get a job at home.  There weren’t that many jobs in San Diego.  And a lot of us had to go back and finish school, the first couple of years, too.  Not too many things that I really disliked, the traveling again.  That’s probably the worst part of it.  But it was so much fun.  The characters in our game, I mean, the names of the players, the rivalries with the Raiders and Denver and then Kansas City.  It was a lot of fun.  I keep saying that word “fun,” but that’s what it was.  We really enjoyed ourselves.

AFL – How would you like to be remembered as a football player?

CA – One I guess that gave it what he had.  I didn’t have a lot of talent, really.  But I had some great coaches at the University of Washington.  I think they instilled some things in me that helped me persevere.  I think one of them, I have an old college coach named Tom Tips, he and Jim Owens from the university up there.  Toughness is a quality of the mind.  They always taught us that if you felt that you were tougher than someone else, and no matter what they did, if you wouldn’t admit that they might have an edge on you, you were going to be tougher than they were.  And that was the name of the game in those early days, toughness.  It is a quality of the mind.

CA – No, just appreciate the interview.  I love this reunion that we’re having.  It has been great.  I don’t get down here too much anymore, I’ve been retired for five years.  I was with the Seahawks for 20 years, but San Diego’s definitely our second home.  I know for most of our kids, it is our original home.