An Interview with the Dolphins and Bengals John Stofa

An Interview with the Dolphins and Bengals John Stofa 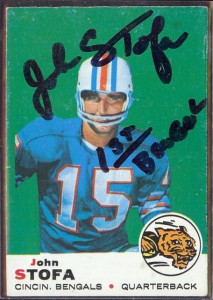 A couple of weeks ago, I posted my first audio interview, which I did with former Texans and Chiefs linebacker, Smokey Stover.

Here is the second interview that I did that day, this one with former Miami Dolphins and Cincinnati Bengals quarterback, John Stofa.  John had a fascinating AFL career in that he led both of the league’s expansion franchises during their inaugural seasons.  So sit back and begin your weekend a bit early with this conversation with John Stofa.

Transcriptions of the above interviews will be added to the site at a later date.
[cincopa AADAiLb0be2E]