An Interview with the Raiders Clem Daniels

An Interview with the Raiders Clem Daniels

I am drawn to the AFL for a number of reasons, only one of which is that the football played during those 10 years was cutting-edge and fantastic.  This week I had an opportunity to conduct a long telephone interview with former Oakland Raiders running back, Clem Daniels.  Like the league itself, Clem’s successes on the field are but a contributing factor in what makes him so interesting.  Daniels was raised in Texas, and played his college ball there as well.  He suffered through a single frustrating season with the Dallas Texans, before fate stepped in and took him to Oakland, where he would make his name as an athlete, a businessman, community leader and advocate for social change.

Our discussion touches on many of Daniels’ high-points – his AFL Co-MVP season of 1963, his being the league’s career rushing leader, and the epic battles fought between the Raiders and Chiefs in the late 1960s.  But this elder statesman of Bay Area football also discusses in-detail Al Davis’s importance not only to the game itself, but to the African-American athlete in particular, and the friendship the two developed over their half-century together.  Daniels was an active participant in the boycott of the 1965 AFL All-Star Game in New Orleans, and he opens up about that situation and its long-lasting effects.  Are the echoes of the walkout still faintly being heard today?  Clem Daniels believes that they are.

This interview runs longer than most, a full 67 minutes.  Despite its length, I feel that this is one of the strongest discussions that I have been able to present on this site, and I feel very fortunate to be able to share it with fans of the American Football League.

If you enjoyed this wonderful piece of history, please consider sharing it with others via the email and social media options given on this page. 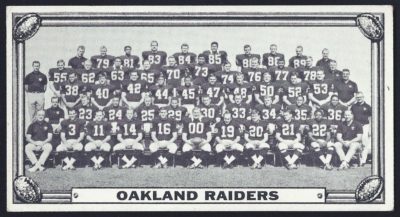