An Interview with the San Diego Chargers John Hadl

An Interview with the San Diego Chargers John Hadl

John Hadl and Lance Alworth both came to the Chargers in the 1962 AFL draft.  By 1964, Hadl had moved into the starting quarterback position, and he and Alworth began one of the great quarterback-receiver tandems of all time.I conducted the following interview with John Hadl in 1999, while researching my masters thesis on Sid Gillman.  We talked a lot about offensive theory, and also got into the reasons for the Chargers falling off in the late 1960s. 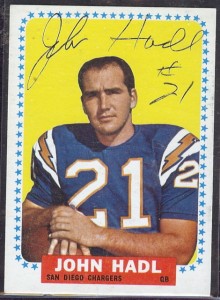 AFL – The first question I have is, when you got to the Chargers in ‘62, could you tell me how the offense was set up, the common formations, common plays, things like that?

JH – In those early days we had the formations set by the flanker’s location.  For instance we called it slot right, slot left and we had Alworth and Garrison to one side and the tight end to the other side.  I’d say slot I left or slot half left or slot full left, which would tell the backs what to do, how to line up in the backfield…  You tell everybody how to line up and where to go.  It was very simple early.  We had I right, full right, near right, far right…Garrison was a strong-side receiver and Alworth was weak side and Garrison was always on the tight end side.

AFL – Was that a pretty common formation at that time?

AFL – How did that change during your time with there?

JH – We got into motion, liked to send Garrison across the formation, or put a back in motion to try to get people isolated, one on one, either the backs or receivers. We’d get movement going across the formation, which would change the formation, change the strength of where the defense was supposed to be at that time.  They had to make a lot of automatic calls and adjustments based on what we were doing with our motion.  Motion would tell me, the quarterback, based on what they were doing back there, if it was going to be a man or a zone.  Then I had one-on-one receivers going deep a high percentage of the time.  I read it before the ball was snapped.

AFL – That’s basically how you read the safeties?

JH – Well, I’d get a feel for them before the ball was snapped.  Once the ball was snapped everybody’s got to go where their coached to go in whatever coverage their in.  I got to where I could key both safeties and the middle linebacker most of the time.  That would tell me where everybody else went.

JH – Well he did it with splits of the receivers.  For instance, we had a system where the weak side receiver, Alworth, would be a certain yardage from the tackle, based on the route called, based on ball location.  Whether it was on the hash or inside the hash.  It was kind of adjusted.  On the strong side of the field, Garrison’s side, to have that kind of same distance from the tight end, based on the route called, that’s how he attacked the field.  We used to attack the whole field by reading the safeties going from side to side over the…trying to get the locations.

JH – Y was the tight end.  We had the three receivers coming off the ball at all times, and our reads would take us to the tight end sometimes.  We really didn’t have, most of the time, any one-receiver statement.  Like I’d throw a route to Alworth, I didn’t stay with him if he was getting double coverage.  The coverages dictated where I would throw the football.  Then we’d use our backs coming out of the backfield in flair action to help and try to control that underneath coverage.  We had reads that could take us deep or short based on what the secondary was doing.

AFL – Now do you think you guys sent the tight end out in a pass route more often than most teams?

AFL – And you think that was based on the abilities of your tight end more than just a game plan of Gillman’s?

JH – The tight end would have a different split at the line of scrimmage to help his release from the linebacker inside or outside and that would help him get down the field quicker.  First being stacked in there where they could get their hands him quicker and keep him from getting off the line.

AFL – Now was all of this a lot different from what you had seen in college?

JH – Oh shit yes.  In college we just ran sprint right and sprint left and you’d go hit that receiver on that side you’re sprinting out to particularly.  This was a whole new world to begin with.  I was calling plays.  I didn’t know what the hell I was doing. The terminology, after two or three years, here’s a call that we’d use.  It would be a weak side sweep, called an east spread half-right toss 79 crack tag.  That’s all just a weak side pitch-toss to the weak side.  I told everybody what to do and the blocking combinations.  Told Alworth to crack, and in the toss areas tell the tackle to pull and the guard to pull.  The book of terminology was incredible.  But to this day I can get in a huddle with those guys and call them and we could run it.  I guarantee you.  I’m serious.

AFL – Now how do you think this changed football as a profession, or football in total?

JH – Well, I think what it did was other coaches, because coaches steal from each other all the time.  They’ll expand on those ideas and give more ideas.  I think what it did was make people attack the whole football field with going deep to being short versus just staying inside throwing the outside.  We’d call routes for the tight end, the back, and the wide receivers and staying over there.  A lot of people did that.  We did that at times, but most of the time we would attack the whole football field reading the coverage and letting the coverage take us to where we should be going.  That expanded into this West Coast Offense.  We actually started the five-step drop and the shorter quick get rid of the ball routes.  About the time I was quitting we were getting on that pretty good.  But Sid came up with that and Bill Walsh came in there in San Diego and picked up on it.  He expanded it, and that’s how it kind of all happened, really.

AFL – That was actually my next question.  Give the basics of the West Coast offense and talk about how Gillman influenced that.

JH – We called it our medium, five step drop route.  I can’t remember the exact terminology.  On that fifth step you got rid of the ball.  The normal seven step drop routes were 15, 17-yard routes, but the outs on the five step drops were only ten yards.  The slants were eight yards.  Everybody’s route distance was cut down, based on the drops and the time count.  That’s what they’re doing today.

AFL – And you say you started that towards the end of your career with the Chargers?

JH – Well, what I think happened too, was they didn’t draft defensively well.  They got rid of Ernie Ladd and Earl Faison and some of the other guys left defensively.  We had always had a good team and all of a sudden we didn’t have a good defense.  We were still scoring offensively, but the defense wasn’t getting the ball back.  They were always behind.  That kind of set a pattern.  The players we drafted, they didn’t have good drafts.  Things just changed, that’s all.  But judging ability and talent really changed the whole thing.  Then Klein and Gillman got into it and then Klein fired him.

AFL – Do you think it made it that much more difficult for Gillman once the dual draft was ended and he was competing against all the teams in the NFL and AFL?

JH – Just numbers changed so much.  There weren’t that many good players like there were available when there were two drafts.  You get in the drafts and fight for what you want and get your share, but even with the NFL, if you’re drafted in the middle or late, the good players are really gone.  They made judgment errors.  Like they picked this guy, a big tall guy, 6’7” guy from Montana or somewhere.  But they passed up Alan Page to get this big tall guy and he could never cut it.  Alan Page went to Minnesota and he was 7-8 times All-Pro defensive lineman up there and Minnesota ended up going to the Super Bowl.  They made four or five big mistakes like that.

AFL – So you basically say it was the weakness of their drafting and their getting rid of key players like Faison and Ladd and Westmoreland that led to the downfall.

JH – Yep.  That’s when it started.  And then they traded Lance.  The talent level went down is what happened.  Like the Broncos won and the other team got their asses beat.  Can’t match up.  That’s what happens.

AFL – Do you think at that point Gillman was forced to deal some of you guys that he didn’t want to deal?

JH – Sid at times was very impulsive.  He makes bad decisions, especially on defense.  He and Ladd got into arguments sometimes and Faison.  That’s why he got rid of them, traded them.  Got them out of there.  They never recouped from that.