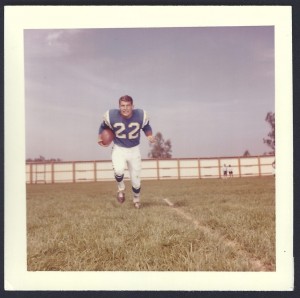 For several years now, I have had in my collections a group of roughly 40 photos taken at the San Diego Chargers 1964 training camp in Escondido, CA.  I have always enjoyed the small (3.5″ x 3.5) pictures, and in fact, I wrote about them this past August, when I was able to add a new photo to the group, that of defensive back and kicker, George Blair.  I had long-realized that my accumulation of these prints must have been incomplete, as I was missing many of the Chargers prominent players of the time, including Lance Alworth, Ron Mix, John Hadl and Paul Lowe.  I figured that my chances of finding more were slim, unfortunately, as they were not a widely-distributed photograph set, but rather appeared to be test prints perhaps made by team photographers.

After a dozen years of buying and selling, however, I have learned to never say never, and just last week an auction for a photo that appeared to be a part of my grouping appeared on eBay.  The photo, of Chargers running back Keith Lincoln, looked exactly like the others, with the same fence, poses, and even ball boys in the background.  I was fortunate to win the auction, despite bids from other Charger and Lincoln collectors, and I immediately sent a message to the seller, asking what information he could give me on the photo, how he acquired it, and if he had any other players.  Unfortunately, the seller, who is located in Bayville, New York, said that the photo came to him in a large collection, and that he had no others.

Regardless, I was thrilled to receive the photo, and see that it absolutely matched the others, so much so, that it even had a small, black ink dot on the back in the same place as the rest.  How this one print made its way from San Diego to New York, I will never know, but I am happy to reunite it with the others.