Another Hank Stram image, though much different than others

Another Hank Stram image, though much different than others 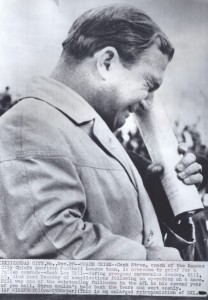 A couple of weeks ago I posted a story about my favorite Hank Stram image.  I like that image because of the sense of joy and achievement that it portrays.  I recently found and purchased another Stram wire photo that I also like very much, but for much different reasons.  Mack Lee Hill was a promising, young fullback for the Chiefs in 1964 & 1965 before his career was cut short by his unexpected death following knee surgery.  This new image shows the depth to which Stram cared for his players, and a vulnerability that is not often associated with professional football.

The captions to the image reads as follows:

KANSAS CITY, Mo., December 20, 1965 – COACH CRIES – Hank Stram, coach of the Kansas City Chiefs American Football League team, is overcome by grief for a fallen comrade — Mack Lee Hill — during pre-game ceremonies Sunday.  Hill, 25, died last Thursday of complications following an operation on a knee.  Hill was one of the outstanding fullbacks in teh AFL in his second year of pro ball.  Stram couldn’t hold back the teears and wept openly.