After recently bringing us the Miracle of the Polo Grounds, Dave Steidel reports on a similar game with last-minute fireworks, this time that ended in the Titans’ favor!

Only a week after the New York Titans lost to Boston on a miracle finish when Titans punter Ray Sapienza fumbled the snap from center with only seconds to play to open the door for Patriot Chuck Shonta to run it into the end zone for the winning score, the Titans were at it again.  But this time it was the New Yorkers who created the miracle. 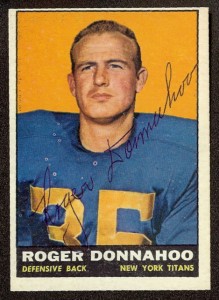 On September 23, 1960 while hosting Denver in the Polo Grounds the Broncos led the Titans 24-21 with :24 seconds left in the game.  This time it was the Broncos who were forced to punt from their own 25 yard line.  Coach Sammy Baugh, knowing that his team would probably have to travel half the length of the field to attempt a game tying field goal, ordered an all out effort to block the punt.  With the hope for another stroke of divine intervention, the Titans swarmed Denver punter George Herring, who had to reach down to his shoe tops to pick up the low snap.  That gave the New York rushers enough time to smother him as seven Titans arrived to block the punt just as it was leaving his foot.  Emerging from the scene with the ball at the 10 yard line was Titan Roger Donnahoo who was escorted into the end for the winning score 28-24.  In just three games the Titans had been involved in two miracle finishes on misplayed punts with less than a half minute of play.  This time Harry Wismer didn’t have to follow the referees into the locker room.