Any Coca-Cola Collectors out there?

Any Coca-Cola Collectors out there? 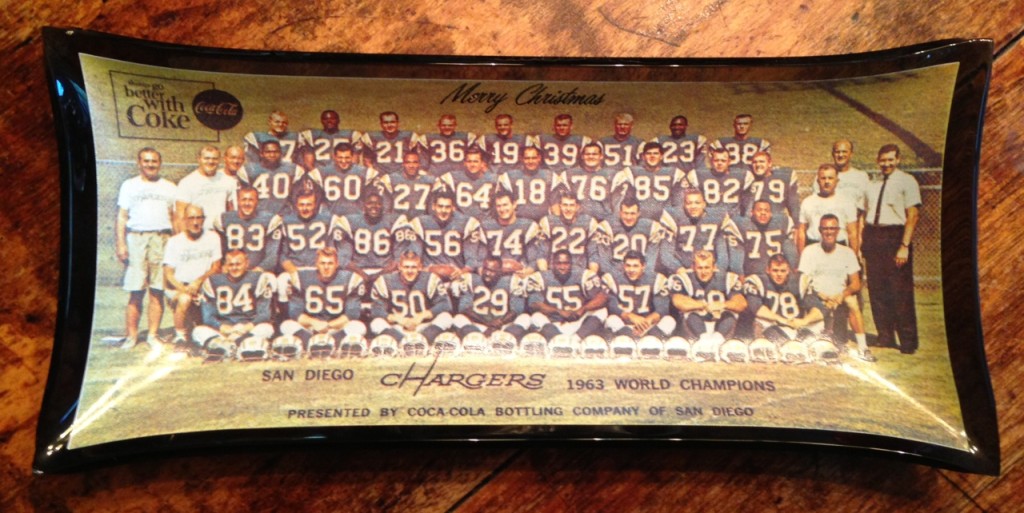 Last week I found an eBay auction for a small glass tray commemorating the 1963 San Diego Chargers.  I had never seen it before, and at the end of the week, was fortunate to be the winning bidder.

I sent an email to the seller thanking him for the auction, and asking what information he might be able to give me about the tray.  His response was quick, but did not have an in-depth history on the piece.

Hi Todd.
Thank for bidding.   The tray went out priority mail yesterday afternoon.
I used to work in the advertising specialty business many, many years ago and I got that tray from one of my vendors. That’s really all I know.  I don’t know how many they made but in the many years I have looked, I have yet to even find a picture of one online.  Thank again
Bob
I received the tray in the mail yesterday.  I took a couple of photos, and sent them off to a couple of Chargers & Coca-Cola collectors that I found online.  One gave me info about the possible period that the tray was issued (Christmas, 1964 – which I had already figured), but not much else.  I have yet to hear back from the other collector.
So I am reaching out to Tales from the AFL readers, hoping that someone will either have some info for me, or perhaps, have connections to Coke collectors.  As I said, the tray is small (3.5″ x 8″), and shows absolutely no manufacturers markings.  As I, nor the other collectors that I know, have never seen one before, they must be rare.  Perhaps this could even be a salesman’s sample that was never actually distributed on a large scale?  Anyway, whatever information you all might produce will get me further along this path than I already am.  Thanks!!
By Todd Tobias|2014-02-05T06:04:52-08:00February 5th, 2014|San Diego Chargers|22 Comments