Here is a very interesting article by AFL historian, Dave Steidel.  The AFL was lambasted in early years as an “all-pass, no defense” league.  However, Steidel presents raw numbers that should change that way of thinking. 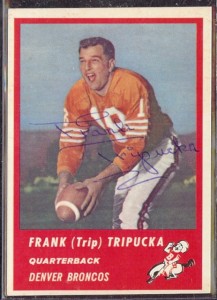 In the first half of their decade the AFL was often criticized for, and deemed less of a league because of, what was thought to be an inordinate amount of passing.  But many AFL advocates felt that it was more of a league because of it aerial dynamics.  NFL purists felt that the only way to play football was to employ predictable runs through and over opponents.  And because Vince Lombardi was preaching that “the running game is what pro football is all about” many others were following his formula in lockstep formation.  To their credit and foresight, the AFL did not want to offer more of the same.  What the AFL had was wide open long-distance offenses that attracted a new generation of fan.  As a result, AFL games were more exciting to watch with the anticipation of a possible score on every play.  So it was by design that they passed and ran in a more wide open style.  As many will testify, the new league survived and flourished because of it.

The AFL was able to move beyond the stereotypical manly-man game plan of the NFL and was able to see beyond that concept and into the future.  Those who became fans of the AFL wanted something different and something less predictable than the game the NFL was offering.  But again, what was being reported to football fans across the country was not as accurate as the facts themselves.  Described as basketball on cleats, fans were led to believe that the pass to run ratio of the AFL was in the neighborhood 6 passes to every run.  But as the facts show in the chart below, it was more of a 1:1 ratio and more in line with the NFL numbers than the NFL and its supporters wanted fans to believe. 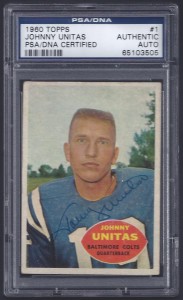 An analysis of NFL and AFL team statistics shows that in 1960 Johnny Unitas and his Colts were taking to the air more often than half of the AFL teams.  Baltimore led the NFL with 32.6 pass attempts per game followed by the Cowboys at 29.5, San Francisco 28, LA, 27.9, Detroit 27.75, the champion Eagles 27.58 and Chicago Bears 27.  The AFL numbers show that the Broncos threw only 4 more passes per game than the Colts!  Denver, with 36.2 passes per game led the AFL, Boston had 33.9 attempts, the Titans 33.8 and the Raiders with 33 were the other AFL teams who threw seemingly more than Baltimore.  But, if you consider that the AFL ran 4.3 more plays per game, and if half of those plays were passes, the “pass-happy” Broncos threw only two more times each game than the Colts and the Colts were throwing more than all of the AFL teams except Denver!  The Dallas Texans threw the least number of passes per game in the AFL with 31.  Looking deeper, of the top seven passing teams in the NFL, six were from the “running” western division.  In other words, it was only the Lombardi Packers in the West who resisted the AFL way.

As the NFL added a 14th team in 1961 their number of plays per team each game dropped from 59 to 58.2.  The number of plays per team in an AFL game also dropped from 63.3 to 61.1, and the plays per game differential dropped from 4.3 to only 2.9 between the two leagues.  The passing differential also dropped from 6.6 in 1960 to 5.4 more throws per game in 1961 and in 1962 the AFL was throwing only 3.6 more passes per game than the NFL.  As the years progressed the NFL passes per game rose to equal the AFL’s, while their number of running plays also dropped to equal that of the newer league.  Isn’t interesting how the league that was doing all the criticizing in 1960 had become the clone by 1969!  So what was all the hubub about and why do all the gatekeepers of the HOF still feel that the AFL was any less of a league?