Ben Davidson – A Celebration of Life

Ben Davidson – A Celebration of Life 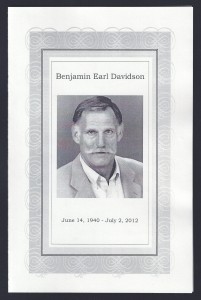 Yesterday afternoon I attended the Celebration of Life for former Oakland Raider, Ben Davidson, who passed away on July 2, after a battle with pancreatic cancer.  It was a beautiful event, and I came away from it with a better understanding of Ben’s life outside of football.  Of course, several of his football friends and former teammates were in attendance.  Tom Flores, Ron Mix, Earl Faison, Bob Zeman, Otis Sistrunk, Marv Hubbard, Art Thoms, Dan Connors, Rod Sherman and others were in the audience, laughing and sharing wonderful old football stories.

I think, however, I most enjoyed the friends and family that I met and listened to, as they spoke of their connection to Ben and his wife, Cathy.  Ben’s brother, Frank, told stories of their boyhood mischief in the hills of Los Angeles.  My favorite was how they once came across a shark’s carcass on the beach, hauled it home on the top of their car, and then tossed it up onto a particularly nasty neighbor’s roof, in a spot hidden from plain view.

His daughters spoke of their memories growing up, with their dad instilling his love for travel in each of them.  A son-in-law recalled how Ben could talk to strangers, and how his honest interest in all things led him to strike up conversations with nearly anyone.  His eldest granddaughter remembered sleeping in a motorhome with Ben and teammate Tom Keating, and how she and Keating were excited when Ben woke up the next morning and decided to serve pie and ice cream for their breakfast.

A group of three women from the Muscular Dystrophy Associated talked about how Ben had volunteered to be a national spokesperson, and his willingness to travel the country in efforts to raise awareness and funding for their organization.

The thing that impressed me the most was how these many people, from all walks of life – athletes, children, postmen, marines, society ladies, family and friends alike, were all moved by Ben’s kindness and genuine personality.  We should all be so fortunate to touch that many lives, in such a positive manner.