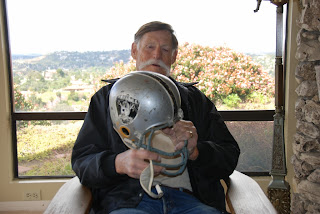 I am fortunate in that there are many former AFL players that live in the San Diego area, and I get the opportunity to meet with several of them on occasion.  One such meeting occurred this past week, when I went to the home of Oakland Raiders legend, Ben Davidson.  Ben and I initially discussed the New Orleans Saints bounty situation (that interview will be the subject of another post in the near future!), but then the conversation bounced around in other areas.
One item that we talked about was his old game helmet from Ben’s Raiders days.  Ben said that players rarely had a chance to keep any of their equipment, but that after he cracked the helmet near the earhole, the Raiders allowed him to take it home.
Looking at this helmet, one can only cringe thinking of the countless collisions that Ben went through while strapped into this particular piece of headgear.  by looking closely at the hundreds of scuffs and marks, one can clearly identify the red of a Kansas City Chiefs helmet, the blue of a Denver Broncos helmet, and white that could be attributed to a number of his AFL opponents.
I sent some photos of Ben’s helmet to my friend, Curtis Worrell of Helmet Hut (www.helmethut.com), and he gave me a few details on this classic AFL artifact.
This helmet in the picture is the RK2 mid 60s with gray seizing coat on the inside.  It has 12 point suspension with the Schutt 60’s JOP face mask mounted very, very low but it was common for the Raiders to do this.  More the equipment manager probably, than the players themselves.  It has the more rounded style numbers from the earlier days.  The decals were 4-6 mil and of course no clear coating on top.    Remember all Riddell helmet were molded in a natural color (beige or off white) then painted on the inside and of course on the outside.  This is why you see the natural shell coming through.
I also learned from Curtis that the 1.5-inch wide, elevated strip running down the center of the helmet  denoted an RK2 “husky model,” used by players with larger heads.
Seeing Ben Davidson holding that helmet in his hands, you would think that he wanted to put it on and get back out to a battle with one of the AFL’s great linemen, perhaps throw a headslap or two, and maybe, just for fun, knock over a referee while making a tackle. 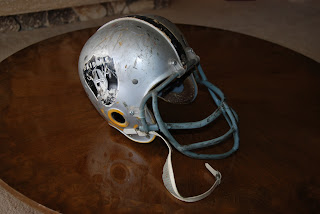 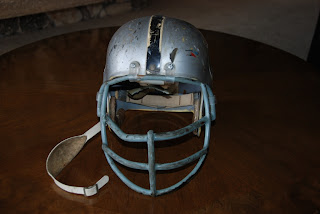 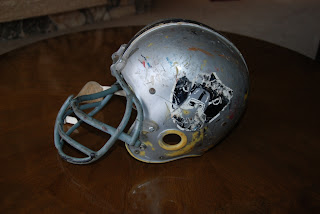 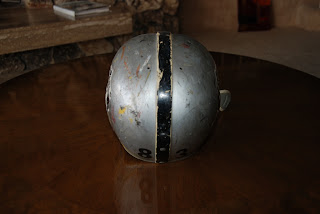 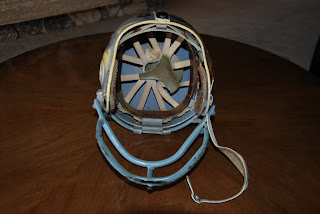