Most of Dave Steidel’s articles are wonderful research-based pieces on AFL games, players or events.  This one is a bit different, as it is more of a personal recollections.  However, as with all of his pieces, this one is great! 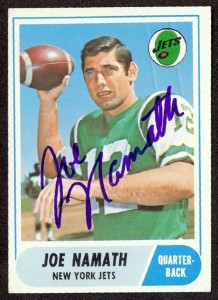 It was August, 1968 and I was ready to begin my freshman year of college.  While scouring the baseball box scores one morning I noticed a small blurb in one of the bottom corners of the sports page.  A group from Mack Trucks (Allentown was the national manufacturing headquarters) had a few openings on a bus trip they were running to New York on October 5th to see the Jets host the San Diego Chargers.  I was on it like white on rice!  Three of my friends and I locked in to see our first AFL regular season game on that fall Saturday evening in Queens!  The bus was filled with Mack Teamsters who generally seemed more anxious to rip open some flip tops of Rheingold Extra Dry than they were to experience Joe and Jets taking on the lightning bolts, but for these four 17 year olds it was our virgin trip to the big city on our own, and we were going to make the most of it.

I remember listening to the Cardinals defeat the Tigers in the fourth game of World Series on my transistor radio to fill the time on the way to Shea and was confident that the El Birdos third win would carry them to their second consecutive series crown.  As the bus pulled into the parking lot and we were handed our tickets we made sure we knew when and where to muster after the game before trekking to our seats behind the left-center field wall of the stadium.  The auxiliary bleacher seats we sat in were only constructed for football games and were directly in front of one of the end zones.  Noting that there were no kicking nets yet, we also planned our escape route to scramble down the steps of the bleachers into the may-lay of waiting arms any time a team was within field goal range in hope of coming away with an AFL ball.

The 3-0 Chargers were coming off of two wins over the expansion Bengals and the Eastern Division champion Oilers and were averaging 30 points a game while their defense was giving up only 12 and had not yet given up touchdown through the air.  The Jets at 2-1had snuck past Kansas City 20-19, pasted Boston 47-31 and lost to Buffalo 37-35 in their first three contests.  Even though it was only the season’s fifth week the game was billed as an important one for both first place teams as Oakland was also 3-0 and Kansas City 3-1 in the west while the Jets were tied at the top of the east with Boston.

A week earlier the Jets handed the Bills what would be their only victory of the season when Joe Namath threw three touchdown passes to Bills receivers (a.k.a. defensive backs Tom Janic, Butch Byrd and Booker Edgerson) en route to his five interceptions on the afternoon.  The question now was, could Joe bounce back, and could the Chargers defend against him if he did.  In the calm of the evening the AFL record crowd of  63,786 settled to have their questions answered but were far from ready for what the Jets showed them through their first few series of plays.   It was twelve minutes into the game and three Jet possessions, and Joe had yet to throw a pass, causing the crowd was grow more than a bit antsy.  Fidgeting as if they were waiting for another shoe to drop, some fans began to call the plays out from the crowd as if Joe had forgotten his mojo.  But play after play it was Snell and Boozer following their blockers into the San Diego front four.  The rumblings continued and many were now wonder if Joe was still shell-shocked from Buffalo.  A contingent of fans began to verbalize their displeasure with the New York game plan and for moment, I thought I was sitting in Philadelphia’s Franklin Field.  But Joe continued for eleven straight running plays.  As usual, the Chargers came out throwing.  John Hadl, the AFL’s early leader in passing, was a bit wobbly on his first few throws and gave the Jets Jim Turner an early field goal opportunity by way of an interception.  Two of us darted down our escape route as Turner jogged onto the field, only to find such a mass of humanity that had the same idea that we did.  Fearing for our safety we decided to rethink our strategy, our seats among the Teamsters was much safer.

On their next possession Hadl put the Californians on top with a 7 yard touchdown pass to Lance Alworth after an 80 yard drive.  The Chargers, playing without fullback Brad Hubbert and his battering ram blocking, tried to balance the loss with Russ Smith and Gene Foster but could not establish their ground game nor spring top rusher Dickie Post.  Out too was the powerful blocking tight end tandem of Willie Frazier and Jacque MacKinnon, causing Hadl to rely more heavily on his league leading passing attack.  He threw another interception before the half and Turner turned it into his third three-pointer to give his Jets a 9-7 half time lead.

Matt Snell’s one yard plunge in the third quarter put the Jets up 16-7 before Hadl took advance to New York’s Randy Beverly by hitting Gary Garrison for two touchdowns to give San Diego a 20-16 lead in the fourth quarter.  It was then that Namath got the nod to again become Namath.  Using punter Curley Johnson and backup fullback Mark Smolinski to fill the Jets own tight end void for the injured Pete Lammons, the two made a key receptions on the ensuing drive that saw Joe throw nine passes over the next twelve plays and was kept alive on a late hit by the Chargers Steve DeLong.  The penalty gave the Jets new life and first down on the San Diego 25 yard line.  The Jets culminating drive was coming straight toward our end zone, and when Namath hit Smolinski with a pass that he rumbled to the six yard line, the clock clicked under two minutes.

In my head I was screaming, “hold that line” as Emerson Boozer advanced the ball to the one yard line, and then took another hand off over left tackle and the goal line.  It was 23-20 Jets with 1:43 left as Hadl went to work for the final drive from his own eight yard line.  After Alworth had spent most his night with cornerback Johnny Sample in his ear, Sid Gillman decided to flip his wide receivers in hope of changing the Chargers karma, and move appeared to pay off immediately.  After receptions by Garrison and rookie Ken Dyer, Hadl and company found themselves on New York’s 37 yard line with :45 second remaining.  The ball was moving away from my seat in the opposite end zone making the action difficult to follow but I was hoping it would move even further down field.   Then came the play of the night.  Using Alworth, who had eight receptions for 137 yards and Garrison, six catches for 163 yards, as decoys by sending them on comeback and crossing routes, Hadl tried to catch cornerback Johnny Sample napping by sending Dyer on a deep route straight up the right side.  But it was Dyer who seemed to doze off, as he lost sight of the ball, turning only in time to see the pass that was intended for him drop in Sample’s anxiously awaiting arms.  Game over!

For the night, Namath threw 34 passes, completing 16, none to San Diego defensive backs, while handing off 40 times, which might have been the difference.  Sports Illustrated’s article by Edwin Shrake the next week described the Jets victory as “Winning With a Loser’s Look”.   But no matter what it was called, the night that started out with boos for their super hero ended with the fickle-finger of fate that had them wandering in defeat the week before now pointing the Jets to the top spot in the East, where they remained for the rest of the year.  For me it was a long, dark bus ride home.  But I don’t think my new Teamsters buds cared all that much just how long it was.  All I could hear were those flip tops popping.