Bum got his start in San Diego

Bum got his start in San Diego

This past week has been a tough one for fans of the old Houston Oilers.  First, their beloved coach, Bum Phillips passed away at the age of 90.  Then just a few short days later, Bud Adams, AFL co-founder and owner of the Houston Oilers and Tennessee Titans, also passed away a 90 years old.  While Adams’ history begins with the AFL, and he is perhaps best known for his football accomplishments during that time, Phillips is better-known for his Luv Ya Blue period with the Oilers in the late 1970s and early 1980s.

However, Bum Phillips’s professional coaching career also began in the AFL as a member of Sid Gillman’s staff with the San Diego Chargers.  Bum Phillips replaced Chuck Noll on the defensive side of the ball, and coached the Chargers defensive line from 1967-1971.

When Sid Gillman became head coach of a moribund Houston Oilers team in 1973, he hired Phillips to his staff where he remained for two years, before taking over as head coach in 1975. 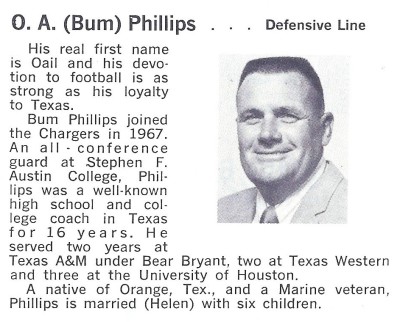