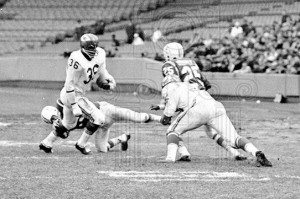 One of the recent phenomena of eBay are the multitude of newspaper and magazine photo archives that have been slowly broken up and sold over the online auction site.  Collectors can find original and wire service prints of nearly every subject imaginable, from royal families to war criminals, sports figures to new automobiles, and everything in-between.

AFL fans can be satiated by these offerings as well; excellent photos from even the earliest days of the AFL are often available, and typically sell at very reasonable prices.  Over the past few months, photo negatives have been listed as well, and right now there are more than 100 listings for Boston/New England Patriots negatives from the 1960s and early 1970s.

I recently scanned through some of the early Patriots negatives, and found several listings for a game between the Patriots and Chiefs on September 21, 1965.  Each listing had between 3-5 images, lots of neat game action with plenty of my favorite players from both teams.  There were a few neat surprises, and so I ended up purchasing three lots.  Each lot was priced at $10, but with a three-for-two special that is currently running, I got all of my negs for $20 plus $2.99 shipping.  I thought that was more than fair. 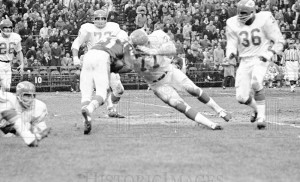 In among the surprises were two rare action shots of Mack Lee Hill (please excuse the watermarks on the images; I haven’t yet received them in the mail, and am using the eBay images), the Chiefs star running back who died unexpectedly on an operating table in December of 1965.  Looking at the strapping young back, it is difficult to imagine that he would be dead a mere three months from when the photos were taken.  The first (and best) image shows Hill about to collide with the Patriots’ Ross O’Hanley, ironically another player who died young (1972).  In a second image, Hill is coming up on the Patriots’ Jay Cunningham.  The play must have either been an interception or some sort of special teams effort, as Chiefs’ offensive lineman Jim Tyrer is shown tackling Cunningham.  The last of my favorite images is of Tales from the AFL reader, Chris Burford, making a tackle near the sidelines.  It is also neat to see one of the dugouts from Fenway Park, the Patriots’ home field, in the background. 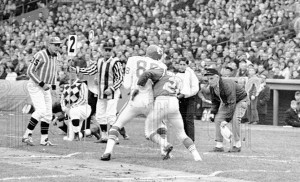 Chris Burford makes a catch near the sidelines.

As someone who has none of my own AFL memories, these images help to really bring the league and players to life.  I am grateful that such interesting items are now available for fans and collectors of all budgets.  Now I need to talk to Mark Palczewski about teaching me how to clean up these negatives so that I can make a few prints!.