Cards that make you wonder…Why?

Cards that make you wonder…Why?

There are some trading cards that just look cool.  Maybe one features your favorite player in a great action shot.  Maybe another looks great because the background of the photo is particularly interesting.  Perhaps you just like the design of cards in a certain year.  Really, just about anything can draw your attention to a particular card or set.

Conversely, there are cards that just leave you scratching you head and wondering why they would be produced as they were.  Several AFL cards have caused me to scratch my head and ask, “what the Hell were they thinking with this one?”  Here are some of my favorites… 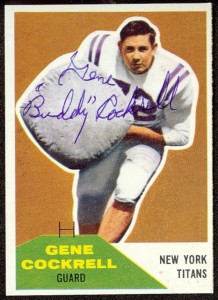 1960 Fleer Gene Cockrell – My entire football playing career consists of four years in high school, so I cannot be confused with Jim Otto.  However, I attended nearly every practice during those four years, and have been around football ever since.  In that time, I cannot ever recall seeing a player running at someone, caring a blocking dummy like a jousting lance.  Nor can I imagine a reason why this would be necessary. 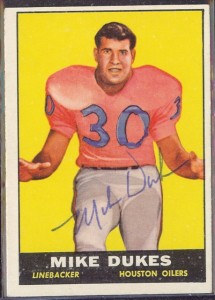 1961 Topps Mike Dukes – I see this card as the product of an overly imaginative air brush artist.  I am sure that the original image used for this card was plenty satisfactory, but this card is just goofy.  The pink jersey, lavender number, odd dancing position…  And what’s up with his teeth? 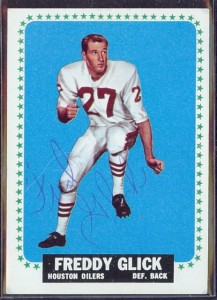 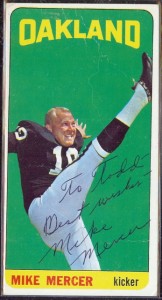 1965 Topps Mike Mercer – Was this image really cropped by an industry professional? 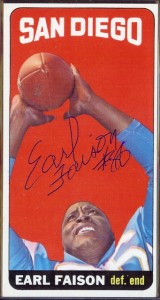 1965 Topps Earl Faison – Earl Faison stood 6’5″ tall, and played ont he defensive line.  Where is the rest of him?  And why is he catching a ball? 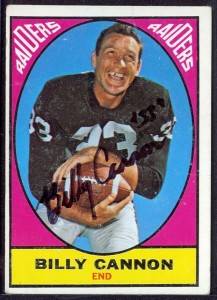 1967 Topps Billy Cannon – Someone forgot to tell Billy to put in his bridge before he had his photo taken.  Ironically, he became a dentist after he retired from football. 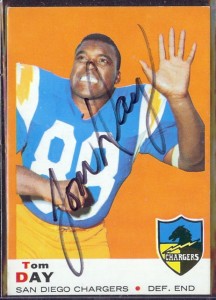