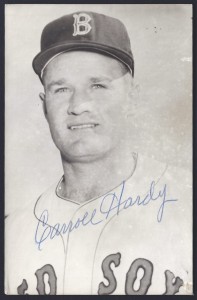 Carroll Hardy is an interesting man.  As collegiate at the University of Colorado, Hardy lettered in football, baseball and track & field.  Coming out of college, he was selected by the San Francisco 49ers in the third round of the 1955 NFL Draft.  Hardy joined a 49ers backfield that was already stocked with future hall of fame members in Hugh McElhenny, Joe Perry and Y.A. Tittle.  He was moved to receiver, and managed to haul in a dozen receptions, four of which he ran in for touchdowns.

Hardy “retired” after one year in the NFL, and decided instead to try his hand at baseball.  After playing two seasons with the San Diego Padres of the Pacific Coast League, Hardy made his major league debut with the Cleveland Indians in 1958, and soon hit a home run while pinch-hitting for fellow Dakotan, Roger Maris.  Hardy was traded to Boston in 1960, and it was as a member of the Red Sox that he became the answer to one of baseball’s great trivia questions.  Name the only person to pinch-hit for hall of famer, Ted Williams.  The answer is Carroll Hardy.

Late in his last season in baseball, Williams fouled a pitch off his foot.  The pain was so great, that Williams limped off the field and straight into the clubhouse.  Hardy, sitting at the end of the bench, was sent in to bat for Williams.  He promptly hit into a double play, but earned his place in history.

After leaving Boston, Hardy spent time with the Houston Colt 45’s and the Minnesota Twins.  He retired from baseball in 1967, with a .225 career batting average and 17 home runs.

Once out of baseball, Carroll Hardy returned to the gridiron – sort of.  He began working in the front office of the AFL’s Denver Broncos, and spent some 20 years as a player personnel executive, where he helped build the famed Orange Crush defense.