Home/Boston Patriots, Mike Holovak/Champions Without A Crown or How Close the Boston Patriots Came To Being an AFL Dynasty
Previous Next 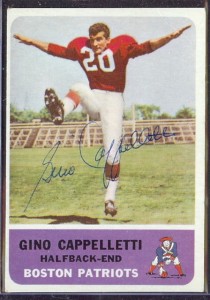 As the old saying goes, ‘close’ only counts in horse shoes.  So if their place in history were to be determined by the rules of scoring in horse shoes, that is, close counts, then Boston Patriots place in AFL history would be one of dynasty instead of bridesmaids.  No less than five times in a six year stretch (from 1961-1966) the Pates went into the last weekend of the season with a chance to win the Eastern Division title.  They did it once in 1963, but had to win the playoff game with the Buffalo Bills to do it.    After a tough go in the league’s first season, one that saw the Boston franchise accepted into the AFL as the eighth and final franchise and ill-prepared for the oncoming league draft that happened with days of their birth, the Patriots righted their franchise to become one of the most fiercely dominant teams over the next six years.

With a defense that devoured opponent’s running games the Pates were led up front by Larry Eisenhauer and Bob Dee as defensive ends, Jim Hunt and Houston Antwine at tackles and Tom Addison, Nick Buoniconti, Harry Jacobs/Don McKinnon/Jim Fraser at linebackers, making this unit nearly impenetrable.  And under the direction of head coach Mike Holovak, who was named head coach five games into the season in 1961, Boston passed, tackled and executed better than most. 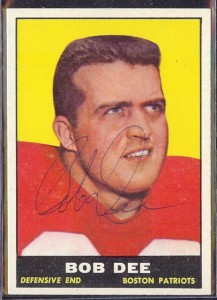 In 1961 the Pates won their last four games of the season only to finish a half game behind the eventual AFL champion Oilers who defeated them in the pivotal game on week 10.  With the 27-15 Houston win the teams swapped tops spots and from that point forward neither team lost.  But an Oiler loss on the last day of the season would have dead-locked the two teams for the top spot.  Knowing the Patriots won their early game gave Houston the motivation they needed as they beat Raiders in Oakland to keep Boston, 9-4-1, a half game behind their 10-3-1 record.  An opening day 21-20 loss to the Titans and a 31-31 tie with Houston proved to be the pivotal games that another point or two would have turned the season’s outcome around.

In 1962 Boston trailed Houston again by a half game heading into the final weekend.  A loss by Houston to the Jets on the final Saturday would give the Patriots the title on Sunday if they could beat the league’s worst team, the Oakland Raiders, who were 0-13.  The Oilers did not lose, and Boston again was late to the altar.  Again, a pivotal loss to Houston 21-17 doomed the season, this time on week 11.  It was a game in which the Patriots not only lost their chance to take over first place, but also lost their quarterback Babe Parilli early in the game with a broken collar bone.  He did not return for the rest of the season.

In 1963 the Patriots held a one game lead over Buffalo but a loss in their last game to the Chiefs dropped them into a first place tie as the Bills win gave them identical 7-6-1 records as season’s end.  A playoff game was needed to break the tie the next week, seven days before the AFL championship game.  Boston was not to be denied as they defeated the Bills 26-8 to win the Eastern Division title.

The 1964 season ended in similar fashion but not as happily.  After a 4-0 start kept both Boston and Buffalo even through the first month of the season a loss to San Diego and a tie with Oakland dropped the Patriots off Buffalo’s undefeated pace.  But by the end of week 13 the Bills record stood at 10-2, with Boston close behind with a 10-2-1 record.  Trailing Buffalo by a half game Boston then rode a five game winning streak into the last game of the season as the two teams faced off in a snowy Fenway Park for a winner take all tug-of-war.  A Boston victory would win the East again and take the Patriots back to the AFL championship game. But this time it was not to be as Buffalo won 24-14 making the Pats and their 10 victories bridesmaids for the third time in four years.

The Pats started 1966 in less than contender form as they posted a 1-2-1 start the season.  But they  then surged to a 7-1-1 record over the next nine games mostly on the coat tails of fullback Jim Nance who was on his way to breaking the AFL rushing record and being voted the AFL Player of the Year.   As the Jets paced the East through the first eight weeks, Boston seemed to be buried behind the Jets, Bills and Oilers.  But with a win over Oakland on week nine the Pates catapulted in the division lead.  A loss the next week dropped them a half game behind Buffalo, and that is how they stayed for the next five weeks.  Again it came down the last game of the season to determine their outcome.  A win would give the Patriots the division. Boston beat the first place Bills twice during the season but did not get the help they needed from the rest of the league to pull even or even overtake their rivals. But now their fate was in their own hands.  On the season’s fifth week the Pates led New York 24-7 after three periods only to see Joe Namath pass his Jets to 17 fourth quarter points to gain a 24-24 tie.  Now they needed to beat the 5-6-2 Jets in the final game to win their second division title.  Their record stood at 8-3-2 while the Bills took an 8-4-1 record into the closing weekend.  At the end of the day the top of the Eastern looked like this: Buffalo 9-4-1 –  Boston  8-4-2 – The Bills had won the Eastern Division crown for the third year in a row.

And so it went, the Patriots were so close, so unbelievably close. 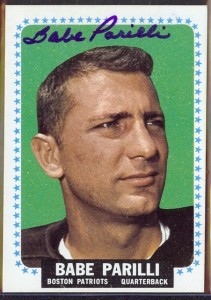 Over their six year run the Boston Patriots posted a record of 47-29-8.  Houston, who beat them out for the title in ’61 and ’62 were 38-45-1 over those same years.  Buffalo, who squeezed by Boston in ’64 and again in ’66 were 51-29-4 from ’61-‘66.  Ironically, a win for Buffalo in the playoff game in 1963 would have sealed their place as the most dominant team in league history by playing in an unprecedented four championship games in a row.  But for Boston it would be a tale of “IF ONLY!”  If only they could have turned one, two or even three of those eight ties into victories, like the 1961 game when George Blanda kicked a last minute 25 yard field goal to gain a 31-31 tie, or the game in 1964 when Oakland’s Mike Mercer kicked a game tying 38 yard field goal with 10 seconds left to play and especially the 1966 game that had the Patriot leading New York 24-7 in the fourth period.  If only they could have scored another point here or there that would have turned a loss into a win.  If only! IF ONLY, then they, the Boston Patriots, would have played in two, three and four championship games in a row and even a possible return for a record tying fifth in 1966!  But instead it would be just one.  They were that close to greatness, yet so far from the prize, the Boston Patriots, the champions without a crown, were that close to being the AFL’s most remembered team.