CHARLIE JONES – A Voice For All Seasons

Home/AFL, Charlie Jones/CHARLIE JONES – A Voice For All Seasons
Previous Next

CHARLIE JONES – A Voice For All Seasons

Guest blogger Dave Steidel remembers the voice of the AFL… 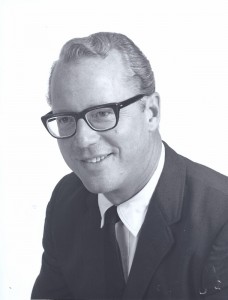 Okay, memorize these three phrases – “The Raiders have just been penalized 15 yards for unnecessary roughness” – “The Chargers will have a first and ten at the Miami 33 yard line trailing 13 to 3” – “Emerson Boozer takes the pitch, running left, now he cuts back to his right where he’s met by Oakland linebacker Dan Conners for a gain of 2 – which will bring up a third and four for the Jets at their own 14 yard line,”  Now close your eyes and in your best Charlie Jones voice recollection repeat the phrases.  Can you hear his voice?  See his silver hair and horned-rimmed glasses?  Feel like you’re a kid again on a late Sunday afternoon watching the second game of the AFL double-header from sun-drenched San Diego, Denver or Oakland?  I can do it every time!   For me, reminiscing about the AFL is always done with Charlie Jones’ voice doing the narrative.  Whether it’s reading a story in an old SPORT or Sports Illustrated magazine or replaying a game of an AFL season on the computer Charlie’s prominent voice is always there.  There are times when I just yearn for those thrilling days of yesteryear with his voice leading the way that I’ll pop in a DVD of AFL Highlights or This Week in the AFL which Charlie narrated and just savor the moment.  It’s like a springtime whiff of cherry blossoms or a mouth full to Trix cereal – it brings back all the best. What a time!  What a voice!  What a guy!

Charlie Jones was born in Fort Smith, Arkansas in 1930 and graduated from the University of Southern California before earning a law degree from the University of Arkansas.  After a brief career at a few local TV and radio stations Jones signed on to be the original voice of the Dallas Texans of the new AFL in 1960.  He too was one of the pioneers. In his first TV assignment, Jones called the play-by-play on the first AFL game ever broadcast, on ABC-TV.  He followed the AFL to NBC-TV in 1965, and covered all ten years of the league’s existence.  He even did the first AFL-NFL Championship game (a.k.a – Super Bowl I).  When the leagues merged he continued to work (AFL) games until 1997, when NBC lost their NFL/AFC broadcasting rights to CBS.  He was also the long time voice of the Fiesta Bowl.

During the course of his 38 years career Jones worked for ABC and NBC from 1965-1997 announcing 28 different sports.  He broadcast the 1988 Summer Olympics, 1986 FIFA World Cup, 1991 Ryder Cup, 1992 Summer Olympics and 1996 Summer Olympics, PGA Tour golf, and Wimbledon tennis as well as Major League Baseball where he was a play-by-play announcer for the Cincinnati Reds, the California Angels and the Colorado Rockies as well as hosting the TV series Almost Anything Goes.

Along the way he even found time to co-author motivational books with Kim Doren like ‘What Makes Winners Win’, “You Go Girl’, ‘Be the Ball: A Golf Instructional Book for the Mind’, “That’s Outside My Boat: Letting Go of What you Can’t Control and ‘Heaven Can Wait; Surviving Cancer,’ to name a few.   His last book was stories of Santa Claus.

His voice was captivating and distinctive, easily recognizable and at times described as a ‘kettle-drum’ but to me it was music to my ears; Pavarotti and Michelangelo rolled into one.  He painted the pictures that are everlasting and the sounds and will last a lifetime.  Charlie was one of a kind, in my mind the best AFL, maybe football, announcer of all time.

Charlie Jones is a member of the Pro-Football Hall-of-Fame, and in my book he is also a member of life’s Hall-of-Fame! He died at age 77 on June 12, 2008 in La Jolla, California, but his voice still lives within me.