>Chasing Down the Elusive Donnie Stone!

Home/Denver Broncos, Uncategorized/>Chasing Down the Elusive Donnie Stone!
Previous Next

>Chasing Down the Elusive Donnie Stone! 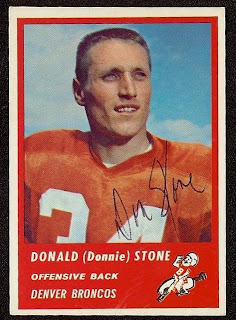 When you set out to collect autographed sports card sets, you know ahead of time that it is going to be a legitimate test of your patience.  Finding guys, sending cards, waiting for them to return, re-sending, finding new addresses, tracking down vintage signed cards of deceased players – it all factors into the collection.  But every once in a while a particular player will prove to be exquisitely difficult to get.  For me, one of those players was Donnie Stone, former running back for the Denver Broncos.
I began collecting my signed 1963 Fleer set back in 2007. I purchased my set of 88 cards with about 45 of them already signed in vintage blue ballpoint. So to finish the set, I sent blue ballpoint pens to all of the guys when I sent them their cards. Pretty much everyone that I wrote to happily signed their card with the enclosed pens and sent them back to me – all but Donnie Stone. So I waited about six months and sent him another 63 Fleer card and pen – again, no luck.
I mentioned this one day to Lance Alworth, who was a college teammate of Stone. Lance told me that Stone was a great guy, and to call him and say that Lance prompted my call. He was sure that Stone would sign then. So I called Stone and we spoke for about 30 minutes. He was very nice. We talked about college ball and the AFL. He said that he thought highly of Alworth, and even that he could help me get my Jack Kemp card signed. He said that he usually didn’t sign, but that he would for me and to send the cards. By this time I had expanded into collecting all of the AFL sets in autographed form, so I sent Stone his two cards – 63 Fleer and 1964 Topps. Nine months went by with no luck. I sent him a friendly reminder note, but still got nothing in return.
Then two years ago I tried again. I had acquired a couple of very nice, vintage 8×10 action shots of Stone running against the Chargers. I had two of each print, so I figured that I would try to send him the prints as a gift and see if that gesture might get my cards signed. I sent him a Priority Mail envelope with a letter that again kindly reminded him that I never got back the cards after our phone conversation, the two prints, an excel printout of my 63 & 64 sets, with highlights to show his cards, a ballpoint pen and each of his cards. Again, nothing.
This past March I decided to make one final attempt. Again I wrote a nice note, included the excel printouts, 63 Fleer and 64 Topps cards and a blue ballpoint. The only difference this time was that I also included a $20. I figured they were goners again after a month went by. But lo and behold, I went out to the mailbox today and found my return envelope postmarked from Oklahoma.  I haven’t been sending out many cards lately, so I was cautiously optimistic about the cards inside the enelope.  I grabbed a knife, slit open the top, and slid out two beautifully-signed Donnie Stone cards – 1963 Fleer and 1964 Topps.
Most people won’t remember Donnie Stone, and his signature will likely mean little to the majority of football fans.  But to me it represents a four-year hunt, and a very enjoyable through-the-mail success. 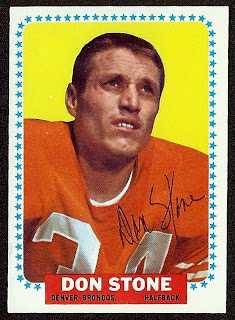