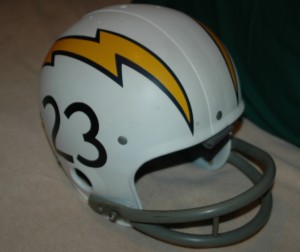 By now it is no secret to anyone that my AFL passion and collection began with the San Diego Chargers.  Among collectors, the AFL Chargers are a popular team, and much of their early memorabilia is hotly pursued.  One man who has accumulated a stunning collection is Pete Lowry.  Pete and I first met after bumping heads on numerous Ebay auctions, I sent him a message and suggested that we get together and compare collecting notes.  Since that meeting some 10 years ago, Pete and I have become good friends and bounced information off each other countless times.  I am also pleased to say that while we both collect Chargers memorabilia, our tastes have become just different enough that we haven’t bid each other up on anything too recently!  The owner of a stunning Chargers collection, Pete sat down and answered some questions surrounding his passion for, and acquisition of AFL Chargers items. 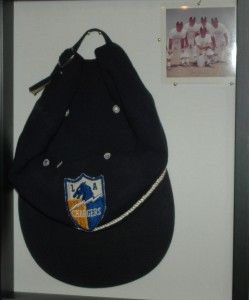 AFL – How did you begin collecting sports memorabilia?

PL – It started when I was a kid collecting football and baseball cards.  I was like other kids, flipping them to win other kids’ cards, pasting and tacking them on my wall.  I still have photos of my 1979-80 basketball cards pasted on my wall.  Even worse, the cards were actually 3 cards in one and were easily separated by perforation which I was clearly more than happy to do. Not sure how many Magic Johnson/Larry Bird rookie cards I ruined.

AFL – How/when did your interest begin in the San Diego and ultimately Los Angeles Chargers?

PL – I opened my first pack of football cards as a kid in 1976.  I came across a card with the Chargers name on it, a team I had never heard of.  I grew up in Maryland so the Redskins and Colts were everyone’s favorite team but I was just not interested.  Anyway, when I saw the name Chargers on that card, I was hooked.  The next day at school I went to the library and wrote down all their stats.  That’s a pretty weird thing for an eight year old to do, but I had to know more about the team.  My Mom would buy me Chargers stuff out of the Sears catalogue since Chargers gear could not be found in MD. Over time I became more curious about the original LA Chargers who seemed to be largely ignored, as if most Charger fans ignored or were indifferent about the fact our team was born in LA.  Real or imagined, I got the sense that the front office of the Chargers would be happy if they never existed.

AFL – How did you make the leap from being a fan to becoming a collector?  What got you started in collecting?  What was your first Chargers piece?  How did you acquire it?

PL – My interest took off in 1991 at the National Sports Collector’s convention. I found a Chargers pennant that had LA and SD on it!!  I had never seen anything like it.  I asked him how much he wanted and when he said $35.00.  The money was in his hand before he could finish.  When Ebay came along, it became a passion.

AFL – What drives your particular interest in the Chargers one season in Los Angeles?

PL – There seemed to be very little information about them and maybe that’s what intrigued me.  Their memorabilia was really tough to find and I embraced the challenge, often to the dismay of my wallet.  It drives me crazy to this day that there are no color pictures or film of an LA Chargers helmet.  I imagine there has to be some somewhere but in all my years I have never seen one and neither has any collector I’ve ever met.  I love that uniform more than any other they have ever had.  It is spectacular and if I owned the team, it would be permanently reinstated. 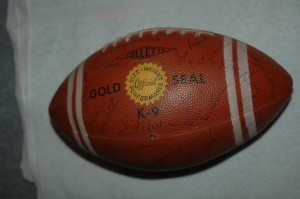 AFL – Do you have a favorite piece in your collection?  What makes it so special to you?

PL – That’s a tough question.  I guess my favorite piece is the July 16, 1960 autographed football.  It was signed at a BBQ in Orange, California, for the public to get to know the team personally.  It’s perhaps the earliest know Chargers autographed football.  I don’t know of an earlier one.  There are so many names on it of players that would never play for them.  It was a challenge to decipher the autographs from records I have of those who were trying out at the time.  It’s probably my favorite because I often imagine what it must have been like to meet them and watch them practice.

AFL – Have you had the opportunity to show your collection to any former Chargers players?  If so, what was their reaction?

PL – I have had a few Chargers over to look at it.  They are impressed but are often very nostalgic.  They will point to someone in a photo and recount a story or a battle they had.  They were drawn to the photos more than anything.  I also showed many of the former LA members at an Alumni function the photo collection you and I put together.  They were thrilled to see it. They were also able to answer the mystery of faces we did not recognize.

AFL – You collect all sorts of Chargers items – photos, cards, pennants, jewelry, etc.  What do you consider to be your most unique piece, and what makes it so? 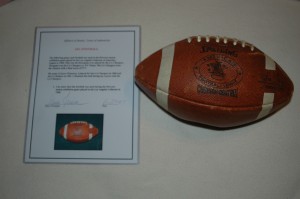 PL – My most unique piece is the game ball that was to be presented to Sid Gillman after the Chargers’ first ever game (preseason) against the New York Titans on August 6, 1960.  I got this ball in a Leland’s auction and the original owner was Garry Finneran who only played with the 1960 LA Chargers and 1961 Oakland Raiders.  He visited my house and recounted how he got the ball.  Sid had apparently run off the field before the refs could present the game-used ball to him so they gave it to Garry to give to him.  Well, Sid was eventually given another ball instead and Garry got to keep that one.  He even told me how the ball got the chip in the leather.

AFL – What is the one piece that you would most like to have, but have not been able to find?

PL – Any part of an LA Chargers uniform.  They are impossible and I have never seen pants, jersey or helmet.

AFL – What is your most interesting acquisition story? 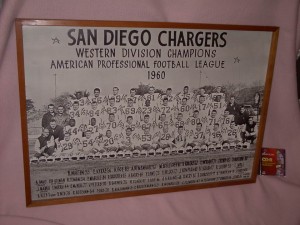 PL – There was a shop in downtown SD that would sell sports memorabilia and I would visit on occasion to see if he had any Chargers stuff.  I had given him my phone number just in case he ever ran into anything.  Well, he called me one day to come look at some stuff he had acquired from the Phil Barile (long time ticket manager) collection. I was stunned with all the great stuff.  I ended up getting a 1960 LA Chargers large team photo, GEM MINT 1961 bobble head with box, neck brace and tissue, an LA Chargers key chain, tie pins, pendant and cufflinks in their original wrap.  I also got a beautiful LA lighter, the only one of its kind I have ever seen.  I saw him about two months after I bought all this, and with seller’s remorse, he offered me double what I had paid.  No sale. 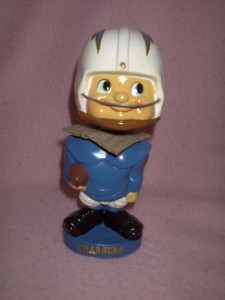 AFL – What are the particular challenges inherent to collecting AFL Chargers memorabilia that might not be an issue if you were collecting other teams?

PL – I’d say the competitive interest in the team is the biggest challenge. Their early stuff is rare and prized by many other collectors.