One of the benefits of writing this blog is that it gives me the opportunity to connect with AFL fans and collectors across the country.  Such was the case when I received a nice note from Denver Broncos collector, Tom Jacobsen.  In today’s post, we talk with Jacobsen about the origins of his collection, and what he has in his Broncos “man cave.” 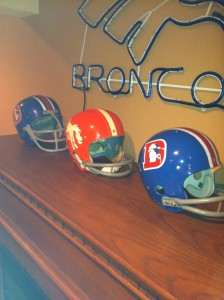 AFL – How did your interest begin in the Denver Broncos?

TJ – My parents first date was to a Broncos game in 1962 and the family has had season tickets since 1967 so I’ve literally grown up going to games.  One of my earliest memories is running around the house with friends and relatives during Super Bowl XII vs. the Cowboys.  I didn’t have happy Super Bowl memories until I was much older!

AFL – How did you make the leap from being a fan to becoming a collector?  What got you started in collecting?  What was your first piece?  How did you acquire it?

TJ – In the early 90’s, at the original Mile High, the Broncos had a team store where they would sell game worn jerseys from the previous season off a rack in the concourse.  I was at a game and walked by and saw them so I stopped to look.  The jersey I picked up was Elijah Alexander’s 1994 road jersey.  It had the 75th NFL anniversary patch on it, 14 repairs and several hit marks.  I thought it was the coolest thing.  Here, in my hands, was the same jersey that Elijah wore when he was tackling Marcus Allen or Joe Montana (both with the Chiefs at the time).  I had no idea that it was possible to have something from the field like this so that jersey was the spark that set me off collection.  Still have it and it’s one I won’t part with.

AFL – How did you settle on game used AFL Broncos items?  Do you do other teams as well?  Other Broncos eras? 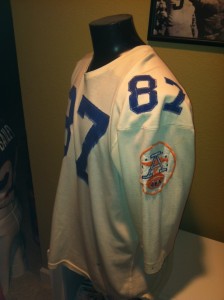 TJ – After collecting for a few years, I realized that while still difficult, it wasn’t impossible to find game used items, you just had to know where to look.  Realizing that every piece wasn’t quite as rare as I thought, I decided it made sense to focus my collection on a specific target otherwise I’d have a house full of random game used items and my wife wouldn’t be too happy with me!   I settled on the AFL era for a few reasons.  One, I liked the history of the team and how they really were thrown together and had a pretty rag-tag existence for quite some time.  Another reason is the AFL era stuff is harder to find – mainly because the team reused items so much as practice jerseys, etc. that they were finally so worn out they were tossed in the trash.  An example of this is a jersey I have that belonged to Rich ‘Tombstone’ Jackson.  The jersey started out as his 1967 home game jersey and then, as years went by, it found its way to the practice field.  As a result, the jersey has over 60 repairs on it!  Finally, I like the older materials that were used – the durene jerseys, the suspension helmets – just something about them is appealing to me. I don’t collect any other teams or sports, just Broncos game used items.  I do have items from every decade the team has been in existence and the major players.  I look closely at every Broncos item I come across and won’t say I’d pass on something that wasn’t from the AFL days, it would just have to be pretty unique.

AFL – Do you have a favorite piece in your collection?  What makes it so special to you? 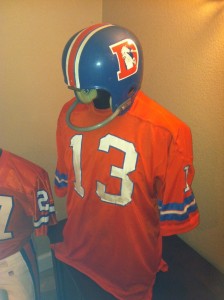 TJ – I do.  Steve Tensi’s 1967 home jersey.  When Dad got his season tickets in 1967 Tensi was the QB.  While Steve’s career didn’t play out like he or the fans hoped, Dad defended him in the stands as the guys who got the seats next to him would complain.  Fast forward years later, I happened across Tensi’s jersey without really knowing the story.  After showing it to Dad he talked about how he stood up for Tensi, thought he got a raw deal here in Denver and should get some credit for how he played.  Fast forward again and I sent Steve a letter asking for a signature for Dad for his birthday.  Steve took it a step further and called Dad.  From that, a friendship was formed and they talked regularly.  Last May, Dad was diagnosed with cancer and the outlook wasn’t good.  During the last weeks of Dad’s life, Steve called everyday to check on him, encourage him, and just generally lift his spirits.  The week before he passed, Dad said to me that it was amazing how the guy he cheered for in the stands back in the 60’s was now one of his closest friends.  Woody Paige wrote a story about their relationship that served as Dad’s obituary.

From a style/look standpoint my favorite is the 1965/66 season.  The crazy horse helmet logo and the sleeve design make those standout for me.

AFL – Have you had the opportunity to show your collection to any former Broncos players?  If so, what was their reaction? 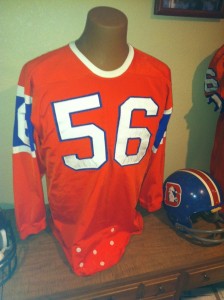 TJ – I have had that opportunity only a few times and generally it’s a fun experience.  They will talk about how they remember a play or something along those lines.  I did have one player who seemed a bit upset that I had something he had worn back in the day but when I also showed him a letter he’d signed regarding the authenticity of the item (which honestly didn’t mean much to me as I’d already photo matched the jersey) and he had a change in his attitude.

AFL – What other kinds of football items do you collect?  Game programs?  Photos?  Trading cards?

TJ – I focus on game used items (jerseys, helmets, etc) and will look for photos of the piece in action.  For me, it’s fun to see the jersey or helmet in action on the field and I enjoy the photo matching detective work that goes along with it.  I have a few items that were worn and ended up on a players card or in a magazine so I will look for those items as well.

AFL – There is a lot of fraudulent “game worn” memorabilia on the market.  What advice would you give to someone wanting to enter into the hobby?

TJ – Sadly, that is a very true statement.  It is cliché, but I’d say to do your homework.   Additionally, while the excitement that comes from finding a piece is part of the fun of collecting to me, I try to let that pass before making any decisions about adding a piece to my collection so that I’m making my decision on what I see and have researched vs. what I’m feeling.  The other thing I’d say is network as much as you can.  First, you’ll meet great people.  Second, you’ll find there are folks out there with an amazing amount of knowledge that are willing to help you if you have questions about a piece. While I don’t focus on modern era stuff, if I do run across something interesting I honestly won’t touch it unless it is handed to me directly from a player or I can find a photo match of the item – not a style match where the font of the numbers looks the same or whatever – but a specific match showing a repair, a hit mark, etc.

AFL – What are the particular challenged inherent to collecting AFL Broncos memorabilia that might not be an issue if you were collecting other teams? 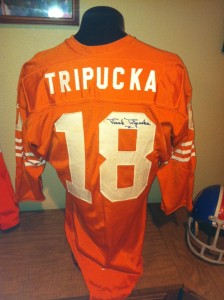 TJ – One specific thing, as it relates to the earliest game used items (1960/1961) is the bonfire.  The team’s original uniforms were cast-offs from a college all-star game and are now well-known for not being very appealing.  Brown, mustard and white was the color scheme with the infamous striped socks.  In the early 60’s, in an effort to rebuild their image and usher in a new uniform look, the team held a bonfire and burned many of the original uniforms.  While not all were destroyed, a good portion was which is why items from those first two years are so rare.

TJ – First and foremost, thanks for your site!!  I think the AFL era is a special one and a site like yours keeps the spirit and memories of that time alive.  Thanks again!