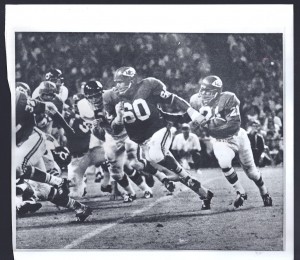 After losing to Vince Lombardi and the Green Bay Packers in Super Bowl I, the Kansas City Chiefs showed that they could indeed play against NFL talent when they defeated the Chicago Bears by a score of 66-24, in a 1967 preseason game.  At that time, the 66 points were the most ever run up on a Bears team in their 47 years of NFL play.  Chiefs tight end, Fred Arbanas, recently recalled the game.  “The game I remember the most was beating Chicago Bears 66 to 24 in an exhibition game after the Super Bowl loss to the Packers.  This game was REVENGE time, as if it was a mini Super Bowl.  All inter-league games were war on the gridiron.”  In these earliest AFL-NFL contests, pride in the AFL was as much of a contributing factor as anything else in the teams’ desire to defeat their NFL counterparts.