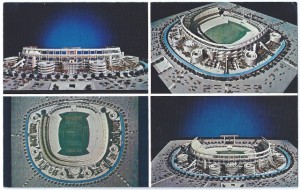 Much has been said about what led to the ultimate success of the AFL.  Wealthy owners, television contracts, signing important players, and a flashy style of offensive football have all been proffered as important reasons why the AFL succeeded in its quest for pro football equality, when so many other leagues – before and after – have failed.

Kansas City Chiefs historian, Bob Moore, recently published an article that gave at least partial credit to a factor that I have not before seen – new stadiums.  Moore makes an interesting case for the building of Shea, San Diego, Oakland-Alameda, and the Astrodome as signifying that the AFL was indeed on steady ground, which thus helped force the NFL to the negotiating table.  An interesting idea, and while not the sole reason behind the merger, certainly a contributing factor.

You can read Moore’s complete article on the Kansas City Chiefs website, which can be found HERE.