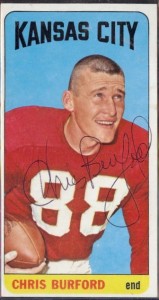 I am always interested in finding new AFL material online.  I check out You Tube for good AFL videos, Remember the AFL for general info, and other sites for whatever else I can find.  I was recently made aware of a site by former AFL star and a regular reader of Tales from the American Football League, Chris Burford.  Chris mentioned that he had posted the Dallas Texans 1960 team highlight video to his School of the Legends page, so I took a look.

I was not too familiar with School of the Legends, so I bounced around Chris’s page to see what I could find.  First off, the concept is pretty cool.  Professional athletes can set up their own pages and use them as a place to interact with their fans.  Similar to Facebook, Chris Burford has a “Wall” where he interacts with his fans, makes announcements and runs his own commentary.  As well, there is a page for videos.  Being a former television sports anchor, Burford has posted clips of interviews that he has done with athletes over the years.  He also has a section for Texans and Chiefs highlights, which has some really great material.  If you have some time, I would suggest grabbing a cold drink and giving yourself an hour-or-so to watch some great AFL footage.

There are also pages for photos, fans, and teammates, where you can connect with other AFL greats, such a Gino Cappelletti, John Stofa and Mike Taliaferro.  As with any social media site, an individual’s page is only as good as the effort they put into it.  As such, several players have pages, but do not post anything to them.  But when you find an active poster like Chris Burford, with whom you are able to interact, the experience can be very informative and quite enjoyable.