>Coffee with a Couple of Raiders

>Coffee with a Couple of Raiders 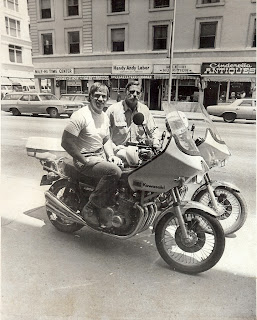 I was up late one night a few weeks ago.  It was one of those times when a zillion thoughts are sprinting through your head, dashing any hopes of soon falling asleep.  So I wandered downstairs and hopped on the computer.  I pulled up my eBay page, and began a few memorabilia searches – “Alworth,” “Gillman,” “American Football League,” and all the rest.  I soon finished scrolling through my standard searches, and started a series of searches that all had connections to the AFL.
One of the searches that I ran that night was “Tom Keating.”  Keating was a defensive lineman for the Buffalo Bills and Oakland Raiders during his years in the AFL.  He was a solid player, and was selected to the AFL’s All-Time Second Team when the leagues finally merged in 1970.  Most of the items found in my search were for Keating’s standard trading cards; he has issues in the 1965 and 1968 Topps sets.  But one particular item caught my eye.  It was a vintage print from the 1970s, of Keating and former teammate, Ben Davidson, sitting on a couple of Kawasaki motorcycles in what appeared to be any Downtown, USA.   The photo was listed with a “Buy It Now” price, so with a couple clicks of my mouse, the auction was ended and the photo was on its way to me.  While not a typical AFL collectible, this photo was of particular interest to me because of a wonderful afternoon that I spent sharing AFL stories with Davidson and Keating.

As you all know by now, one of my collecting passions is for trading cards autographed by AFL players.  I enjoy acquiring the company sets of the 1960s, as well as additional cards for a handful of individual themed sets that I have put together myself.  Ben Davidson and Tom Keating both feature prominently in these collections of mine, and while I had been able to get all of my Davidson cards signed at one point or another, I hadn’t had nearly the same success with Keating.  Fortunately for me, Ben Davidson happens to live about two miles from my home, and despite his on-field image, he is one of the nicest people that you could ever hope to meet.

Ben and I had interacted several times over the years, and I had been to his home in La Mesa.  So stuck with my unsigned Tom Keating cards (as well as other Raiders, J.R. Williamson and Isaac Lassiter, at that time), I gave Ben a call to see if he happened to still be in touch with any of these guys, and if he might have some tips for me on how I could get my cards signed.  As luck would have it, Davidson was still in contact with Keating, and as a matter of fact, Keating was coming to stay with him for a few days the very next weekend.  Ben invited me to come over to the house, where I could meet Keating and have him sign my cards.
So on a cool Saturday afternoon in October 2009, I made my way up to the Ben Davidson’s home.  I was armed not only with the cards that I hoped to get signed, but also the two binders that house my collection of signed AFL cards.  I also brought along a nice bottle of merlot as a “thank you” for Keating, as Ben had mentioned that Tom enjoyed red wine.
After ringing the doorbell, Ben welcomed me in, and took me to the kitchen table where Keating was sitting.  Introductions were made, pleasantries were exchanged, and Keating happily signed my cards.  As Ben passed around cups of coffee and joined us at the table, I brought out my binders and the old Raiders linemates began flipping through the pages.  What began as a quick trip to get a couple of signatures on some bubble gum cards turned into two-and-a-half hours of laughter and stories, that came flooding back each time a page of cards was turned and long-forgotten teammates and opponents were recalled to memory…

Dan Birdwell, who couldn’t shave without cutting himself a dozen times, and whose ear lobes somehow stuck out from the bottom of his football helmet.

John Bramlett, who Keating recalled as “the dirtiest sonofabitch I ever played against,” but who now runs a large and successful Christian ministry.

Billy Cannon, now a dentist, who ironically is pictured in his 1967 Topps card with a gap in his mouth because his bridge wasn’t in.
After the binders had been put away, Ben and Tom began telling stories of their off-season excursions.  These two teammates shared an appetite for adventure, and once the football season ended each year, they would hop on their motorcycles and go riding for months at a time.  All over the country and through Mexico, beginning with no real destination in-mind and just seeing where their bikes would take them.  It seemed a fitting off-season plan for a couple of guys who reveled in the Raiders bad boy images for the other seven months of the year.
So when I stumbled across that photo nearly two years since, I knew that it had to become a part of my collection.  It arrived a few days later, and turned out to be even more enjoyable than the auction listing had made it appear.  The photo was apparently taken by a Denver Post photographer on June 8, 1976, and used in the newspaper soon after.  The caption, clipped from the paper and affixed to the back, reads “Tom Keating and Ben Davidson, traveling the highways in search of a song.”
Since receiving the photo, I have made copies to give to Ben and Tom.  I don’t know if they will recall it being taken, but hopefully it will bring back some fond memories.  It is the least that I can do.  As a football historian and fan of the old AFL, sitting with them that day, sipping coffee and listening to their stories was like a dream come true.  It was simply one of the greatest collecting experiences of my life. 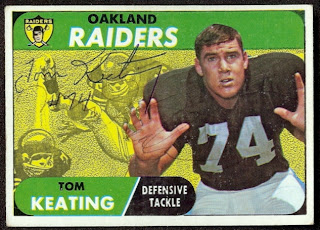 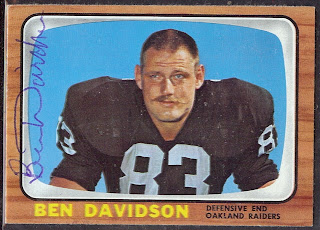