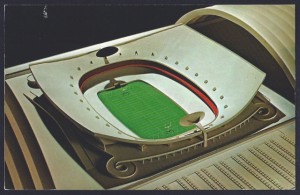 A few weeks ago I posted about finding a couple of Kansas City Chiefs postcards from the 1960s.  I really liked the color images used in the Bert Coan and Len Dawson postcards, and have since done a bit of digging around to see what other AFL-related postcards were available in the 1960s.  I am pleased to say that I have found several cards, with a variety of subject matter.

First, in researching the Chiefs cards, I came across one more card that appears to be from the same series as Coan and Dawson.  This card features a scale model of Arrowhead Stadium.  I have still not found any information regarding exactly when the cards were issued, or what other players I may find, but I am hopeful that there are more. 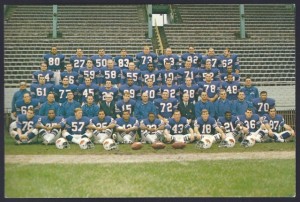 In addition to the Chiefs cards, I found really neat postcards showing both the 1967 & 1968 Buffalo Bills teams.  The Bills were less than successful in the late 1960s, but these cards are still a nice addition to my collections.  I was particularly excited to find the 1968 team card, as it features Bob Kalsu (third row, far left #61), in what may be the only card-type appearance that he made during his short career.  Kalsu, an offensive lineman and the Bills Rookie of the Year in 1968, was killed while serving in the Vietnam War in July 1970. 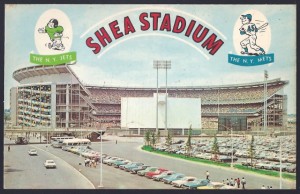 There are, of course, a plethora of postcards featuring many of the stadiums that were used by AFL teams.  There is something of a challenge in finding cards of these facilities that were actually printed during the 1960s.  But if you are just looking for representation of a stadium regardless of the era, then finding examples should not prove a challenge.

I have incorporated AFL postcards into my regular memorabilia searches, and hope to find more as time passes.  Additionally, I would like to find any documentation about these cards, to better define the potential for collecting AFL postcards.  You can see my small collection in total on the AFL POSTCARDS page.