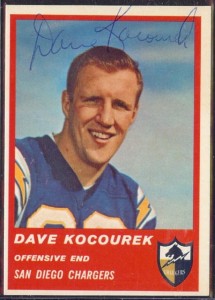 In the summer of 1998, I was beginning the research for my master’s thesis on Sid Gillman.  One of the things that I did to acquire information was type several questions and mail them to some of Gillman’s former players.  Only a hanfdful of the players responded to my inquiries, but one that did was tight end Dave Kocourek, who played for Gillman’s Chargers from 1960-1965.  Kocourek is a wonderful person, who sadly is in the late stages of a post-football brain injury and the resulting dementia/alzheimer’s disease.  However, back in 1998, Kocourek took the time to respond to my inquiry with well-thought out answers.  I hope that you enjoy them.

AFL – What was it, from a players standpoint, that made Sid Gillman’s offenses so special?

DK – Sid liked to stretch the field and I think that was exciting for the players as well as the fans.  Jack Kemp was very strong, so long passes were very common during the first 2 or 3 years.  Gillman’s access to and analysis of NFL films was also a big plus for the Chargers.  See question about “How did Gillman better define passing routes and the quarterback and receivers responsibilities.”

AFL – How did Gillman’s offense change during your time with the Chargers?

DK – When Lance Alworth got healthy in 1963, Sid had Lance going deep fairly often.  The success of this is evidenced by Alworth’s yardage total and number of touchdowns.  With Lance as the deep threat the defenses were stretched and Paul Lowe and Keith Lincoln were very effective rushing the football.

Sid obviously had us take whatever the opponents gave us.

AFL – How was your role as an offensive player different or more demanding in a Gillman offense than in others?  How so?

DK – Since I played for only one team not using Gillman’s offense (Al Davis had taken it to the Raiders), I have difficulty comparing one coach’s offense with another.

Sid was one of the early if not the first head coach to use a tight end.  I also enjoyed playing wide receiver when required.  Since he basically oversaw the passing game, he was generally around the area that I was.

AFL – How did Gillman differ from other coaches you played for?

DK – Gillman emphasized defensive recognition for all the backs and ends.  This allowed us to make pattern adjustments according to our opponent’s defensive alignment.  With an absolute minimum number of words and numbers we were able to describe the basic alignment of all 11 opposing defensive players.

He was also a stickler for small details and many a time he would make us run the same play 7 or 8 times until it was perfect.

AFL – What sparked Gillman’s interest in the passing game when most other teams were making their success on the ground?

DK – I am not exactly sure why he became so interested in the passing game however he was blessed with some pretty good receivers like Tom Fears and Bob Boyd as well as quarterbacks Norm Van Brocklin and Bill Wade.  He strongly believed that the long pass was the game breaker.  With John Hadl throwing to Lance Alworth, Sid’s fondness for the vertical game grew even greater.

AFL – What were some of the things that Gillman used in his offense that you had never seen before?  Was his offense always changing or was it stagnant?

DK – One of the things that Sid did every so often was to bring the weak side wide receiver in tight.  Generally, it was Don Norton, who was somewhat small by todays standards.  Norton, however, was a very tough scrapper, and was very effective as a weak tight blocker.

This tactic was quite successful if I recall against the Patriots in the 1963 Championship game.  The Patriots had never seen us with that alignment, and it was very successful, just ask Keith Lincoln!!

AFL – What was the players attitude toward Gillman?  Did they think of him as an offensive innovator or was just another coach?

DK – I think the players had very positive attitudes toward Gillman.  He had somewhat of a father-like image to me, and I am sure many of the other players had similar feelings.

I personally thought of Sid as an innovator of the offensive passing game, and most of the backs and receivers felt the same way.

AFL – What effect did Sid Gillman have on you as a person or a player?  How did he make you a better football player?

DK – Sid was very encouraging to me, and so I had very positive feelings towards him.  I am sure he and the other coaches (namely Al Davis) were very responsible for much of whatever success I achieved.  I hate to draw assumptions of what the other backs and ends thought of their relationships with the coaches.  For myself, I felt like we were all family striving to achieve success on the football field. 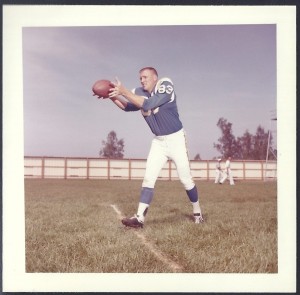 AFL – How did Gillman better define passing routes and the quarterbacks and receivers responsibilities?

DK – Sid had copied many NFL game films and any other films he could get his hands on.  The films were broken down according to the specific type of pass routes run by many of the all-time great receivers.  Raymond Berry, Billy Howton, Billy Wilson, Elroy Hirsch, Tom Fears and many others.  Watching many of the very best receivers run specific patterns gave me and my teammates a clear picture of what was necessary to get open against a defensive back.

AFL – Is there something that people never consider, but should, when discussing Sid Gillman?

DK – Sid Gillman was a very good people person and I do not believe he was ever given credit for his people skills.

I cannot recall if it was during the regular season or during training camp but Sid and Esther hosted our entire squad and families to an afternoon barbecue at their home on Mt. Helix.  A local restaurateur catered the affair and a good time was had by all.  I can still remember Ernie Wright trying to teach his wife how to swim in the Gillman’s pool.

AFL – What are your memories of training camp at the Rough Acres Ranch in 1963?  Did that experience help your team as a unit?  Explain.

DK – Rough Acres Ranch was a joke!  I believe Sid and the talent scouts assembled a group of football players that won in spite of the facilities and not because of them.

Cattle grazed on our practice field when we were not practicing.  I dove for a low pass and landed in cow flop!

Our shower had no roof and consisted of a frame of pipes with canvas sheets for walls.  Try showering in a lightning storm!

Also we were an hour and a half to two hours from San Diego.  If you were hurt and needed attention it was not easy getting to a hospital for x-rays or whatever was needed.  I had three broken bones  in my back and did not get x-rayed until three weeks later while in Denver for an exhibition game.

AFL – Tell me about the 1963 team.  What made that team so successful?

DK – The 1963 team was a powerful blend of speed, strength and a superior coaching staff headed by Sid Gillman.  Al Davis left for a head coaching job with eventual ownership in Oakland.  Chuck Noll left the Chargers for the Colts prior to getting the top job in Pittsburgh.  Obviously, Gillman had a good eye for coaching talent as well as players.

I think it is ludicrous to say that we were successful because of the training facilities.  We also were the first team to incorporate a mandatory weight training program.  Perhaps the adversities we faced with the cows, outdoor showers, and snakes had absolutely nothing to do with molding us into a VERY COHESIVE FOOTBALL TEAM.