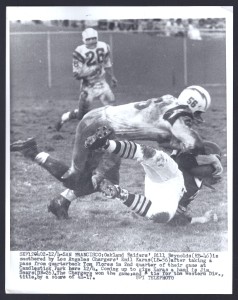 I picked up a neat old wire photo the other day.  The photo is from the December 4, 1960, game between the Los Angeles Chargers and Oakland Raiders at Candlestick Park.  The caption reads:

“Oakland Raiders’ Bill Reynolds (HB-40) is smothered by Los Angeles Chargers’ Emil Karas (LB-56) after taking a pass from quarterback Tom Flores in the 2nd quarter of their game at Candlestick Park here 12/4.  Coming up to give Karas a hand is Jim Sears (DB-26).  The Chargers won the game, and a tie for the Western Div., title, by a score of 41-17.”

The Raiders record fell to 5-7 after this game, and the Chargers held strong at 8-4.  Oakland split their two final games to end the season at 6-8.  The Chargers won their final games (part of a four-game winning streak) and finished the season with a 10-4 record and the western division title.  The Chargers then played the Houston Oilers in the first AFL championship game, which they lost by a score of 24-16.

It is interesting to note that Emil Karas might be fined for this tackle today, as it appears that he has an unnecessary elbow aimed directly for Reynolds’ head.  How the game has changed.