Defense: The Only Way the Raiders Might Win – An S.I. Vault Article

Home/AFL, Oakland Raiders/Defense: The Only Way the Raiders Might Win – An S.I. Vault Article
Previous Next

Defense: The Only Way the Raiders Might Win – An S.I. Vault Article 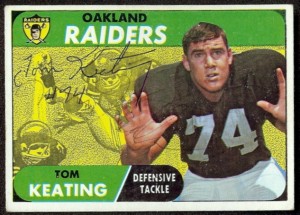 I was looking through the S.I. Vault the other day when I found this article that discussed the Oakland Raiders’ chance of winning Super Bowl II against Vince Lombardi and his Green Bay Packers.  It is interesting stuff,in which author Edwin Shrake basically states that the only chance that Oakland had to win was if the defense put on a big show.

While the Raiders vertical offense was dominating, their defense, nicknamed “The 11 Angry Men,” was equally impressive.  Their defense averaged nearly five quarterback sacks per game (69 sacks over 14 games), and featured Ike Lassiter, Dan Birdwell, Tom Keating and Ben Davidson across the front.  The defensive backfield consisted of stars such as linebacker Dan Conners and defensive backs, Willie Brown and Dave Grayson.  The defense intercepted 25 passes and recovered 28 fumbles in 1968, an average of more than three turnovers per game.

Unfortunately for Raiders fans, a Super Bowl victory was not to be.  The Raiders defense sacked Packers quarterback, Bart Starr, four times, but did not force any turnovers.  Meanwhile the Packers came out with a balanced attack, which netted them 160 yards on the ground and 162 through the air.  The final score was 33-14 in the Packers favor.