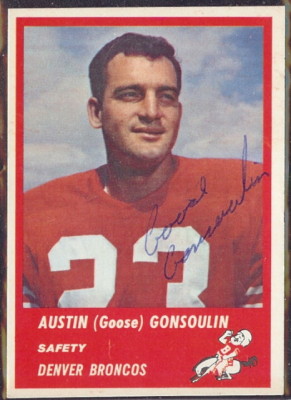 While the American Football League is best known for its offensive stars – Alworth, Namath, Maynard, Dawson, etc., there were a number of fantastic defensive players that made names for themselves in the old league. In terms of defensive backs everyone remembers hall of famers Willie Brown and Johnny Robinson, but George Saimes, Kenny Graham and Dave Grayson were outstanding in their own right.

For many years the Denver Broncos had a safety by the name of Austin “Goose” Gonsoulin who was also among the league’s greats. Gonsoulin was a two-time All-Pro, five-time AFL All-Star and was selected as an AFL All-Time Second Team safety. The Talk of Fame Network recently reviewed Gonsoulin’s candidacy for the Pro Football Hall of Fame and found him to be well within the realm of potential inductees.