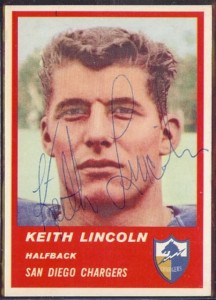 Much has been said about the great offensive backfield that the Green Bay Packers employed during the 1960s.  Jim Taylor and Paul Hornung were all stars, NFL champions, and both are enshrined for all eternity in the Pro Football Hall of Fame.  Heady accomplishments for sure.  However, there were other successful backfield duos in professional football in that era, none of which received equal billing as Lombardi’s boys.

Over in that “Other League,” the San Diego Chargers had Keith Lincoln and Paul Lowe in their offensive backfield, one of the great duos in league history.  Initially, this comparison had been planned between the AFL’s Keith Lincoln and the NFL’s Paul Hornung.  Handsome, blonde and successful on the field, both were called the Golden Boys of their respective leagues.  Both, however, also had outstanding backfield mates, and it did not seem fair to overlook them in the comparison. 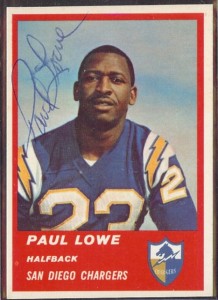 As the four players’ careers did not overlap exactly, for the sake of this comparison I chose to use the seasons of 1960-1966.  These seasons represented the most productive years for all four players.  Keith Lincoln’s professional career did not begin until 1961, and Paul Lowe was forced to sit out all of 1962 with an injury.  Paul Hornung missed the 1963 season after being suspended by NFL Commissioner Pete Rozelle for his role in a gambling issue.  Of the four, only Jim Taylor played in each of the seven seasons, and as a result, he played at least 10 games more than any of the other three.

When going strictly by the numbers, here is how the two backfield shake out: 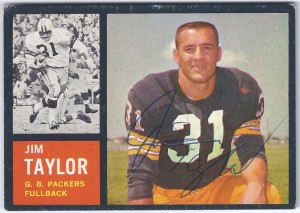 Clearly Jim Taylor was the most productive back of during the time period, though he did play those 10 additional games.  In looking over the statistics, Hornung and Taylor had nearly 700 more carries than Lincoln and Lowe, yet ran for just 1019 more yards.  The Packers’ Lombardi was more of a running coach that the Chargers’ Gillman, and Green Bay did not have a Lance Alworth-caliber receiver on their team at this time.

As for accolades, Lincoln and Lowe earned six AFL All-Star Game appearances between the two of them.  Jim Taylor made four Pro Bowl squads during this period, while Hornung did not make any.

Both Hornung and Taylor were named to the NFL’s 1960s All-Decade Team.  Paul Lowe earned AFL All-Time First Team honors, while Lincoln made neither the first or second team. 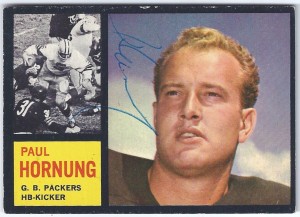 In the final analysis, I would have to say that the Packers duo was more slightly productive – the numbers do not lie.  However, their success was greatly enhanced by Lombardi’s offensive style.  While the Chargers’ backs were dominant in the AFL, they suffered from Sid Gillman’s emphasis on the pass, as well as from having such a dominant receiver as Alworth in their line up.  Thoughts?