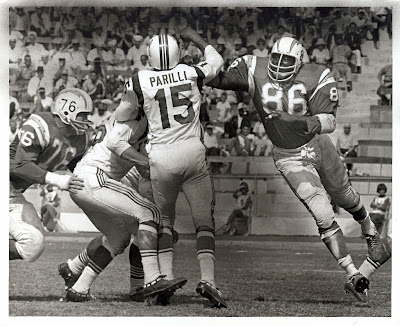 Earl Faison was a dominant defensive end for the San Diego Chargers from 1961-1966.  A back injury cut short his professional career, but those who saw Faison play say that in his prime, he was as good as anyone to ever play the position.
Earl Faison grew up in Newport News, Virginia in the 1940s and 1950s, and saw his share of racial strife.  More than once I have heard him talk about the advice that he received from his high school football coach when discussing his future.  “Earl,” his coach began, “the way I see it, there are three fields that you can go into after high school – tobacco, cotton and football.” 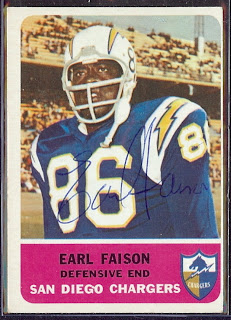 Faison played his college football at the University of Indiana, and then was the first player selected by the Chargers in the 1961 AFL draft (he was also drafted by the in the fifth round of the NFL draft by the Detroit Lions).  He, along with fellow rookie, Ernie Ladd, made an immediate impact with Chargers, and was a key to the original “Fearsome Foursome” defensive line.
I have spoken with Earl Faison on many occasions, and talked about the Chargers, the AFL, and the situations he encountered as an African-American football player in the racially-charged 1960s.  The following is an excerpt from an interview I did with Earl in 1999, in which he recounts the Chargers stance on race-relations
One of the things that I am most proud of the Chargers is that we were at the forefront of Civil Rights, the Chargers were.  I think it stemmed from the fact that Barron Hilton owned hotels.  The Chargers used to stay at those Hilton Hotels and we were the first blacks to ever stay in many of them in the South.  I remember there were Civil Rights pickets in front of our game in Houston at old Jeppesen Stadium.  Lloyd Wells used to be a photographer for the Kansas City Chiefs and then turned photographer for Muhammed Ali.  Well, somehow he was a newspaper reporter with a black newspaper in Houston.  He would come around to us and ask us not to play the games because the blacks weren’t allowed in the middle of the stadium; they had to sit in the end zones.  So we protested some of those games and didn’t play a couple of them.  Well we played, but we let it be known that we didn’t like it.  So eventually they started giving open admittance to blacks.
Little Rock, Arkansas, Dallas, Texas…  We often went to the movies on Saturday night before a ball game.  In Dallas, there was one theater there that we went into.  We had the whole mezzanine to ourselves.  During the course of the movie, we kept hearing laughter behind us.  We didn’t know what was going on.  The lights came on and there were black people seated up in the very top of the theater behind chicken wire.  Naturally we had to leave.  They wouldn’t allow us to go down to the lobby to get popcorn and drinks, so we walked out of the theater. 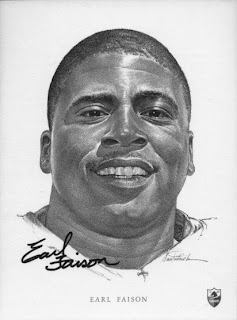 But the Chargers, at that time, integrated a lot of places, and helped the South along.  Because a lot of the other teams, Boston Patriots, and all of those other teams that were coming down there, if they went to Houston, Texas to play the Oilers, whites lived in a hotel and the black guys lived someplace else, separately.  Except for the Chargers.  All those places, we’d open them up.  Players and management, they would support us.  We would go to them and let them know that we didn’t like what was going on, and they supported our cause.  If you were thinking about boycotting the game, I mean there were games in Atlanta, Georgia, where we decided that we were not going to play and the mayors and everybody else came in to try to talk us into playing the game.  Convince us to play the game.  We let it be known that it took more than that.  That never made the newspaper, those types of things.  Never made the newspaper for some reason.
Earl Faison retired from professional football in 1966, after splitting the season between the Chargers and the expansion Miami Dolphins.  After football, Faison began a long and successful career in the San Diego Unified School District, in which he was a teacher, football coach, vice-principal, and ultimately administrator in the district offices.  He is retired and now lives in Prescott, Arizona.
By Todd Tobias|2012-04-27T14:42:36-07:00September 14th, 2011|Black History Month, Earl Faison, Fearsome Foursome, San Diego Chargers, Uncategorized|13 Comments