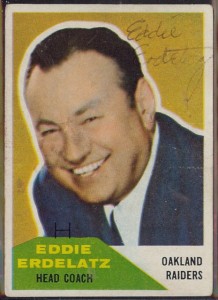 Though it seems as though Al Davis ran the Raiders forever, there were men that came before him.  In fact, Davis took over the Raiders head coaching position in 1963, replacing William “Red” Conkright.  Conkright in fact, had previously been a Raiders assistant who ended up replacing head coach, Marty Feldman, after he led the Raiders to a 2-15 record over a 17-game period in 1961-62.  But Feldman himself, had also previously been a Raiders assistant.  The Raiders first head coach was named Eddie Erdelatz, formerly of the Naval Academy, and the man who led the not-so-mighty Raiders through their inaugural season of 1960.

Eddie Erdelatz was a three-year end at St. Mary’s College, beginning in 1932.  After completing his collegiate playing career, he moved into the coaching ranks, taking over the lines for St. Mary’s in 1936.  Erdelatz bounced around to different coaching positions in Northern California for several years before joining the Navy during World War II.  After the war, and a three-year stint as an assistant at the Naval Academy, Erdelatz put in three years as defensive coordinator of the San Francisco 49ers of the A.A.F.C.

Eddie Erdelatz got his first shot as a head coach when he traveled back East to take over a miserable Navy team in 1950.  Over a period of nine seasons, Erdelatz turned a moribund Naval Academy squad into a respectable, winning program that posted victories in the Sugar Bowl (1955) and Cotton Bowl (1958).  Things however were not right for Erdelatz towards the end, and he left the Navy team after the ’58 season, and took a restful year away from football in 1959.

The professional game proved to be more of a challenge to Erdelatz and his Raiders brethren.  In addition to not having the deep pockets that were so important in Dallas, Houston and Los Angeles, the Raiders were several months behind the other teams in starting their organization.  The result was evident on the field.  While the Raiders had several players that would eventually have long and productive careers in the AFL such as Wayne Hawkins, Jim Otto, Tom Flores and Babe Parilli, they did not have the depth of talent to succeed in the new league.   The Raiders finished their first season with a disappointing 6-8 record.

Despite some off-season re-tooling, the Raiders began the 1961 season by losing their first two games by a combined score of 99-0.  The catastrophic losses proved to be the death toll for Erdelatz, and he was fired on September 18, 1961.  While he attempted to get back into football with other teams, the Raiders job was Erdelatz’s last in the game.  He began working in the financial industry in 1962.

Eddie Erdelatz underwent surgery to remove a malignant tumor from his stomach in 1966, but doctors learned that the cancer had already metastasized.  He died two weeks later, on October 27, 1966.