In 1966 my parents gave me one of the best birthday presents I ever received, a subscription to Sport Illustrated.  I have been a subscriber ever since.  The first issue I received was the Sportsman of the Year copy with track star Jim Ryan on the cover.  SI covers instantly became my memory bank in which most of the memorable events, of my life, sports and personal, would be stored for safe keeping.  Throughout the next thirty years I could look at an SI cover and tell you what was in the magazine that week as well as the events that were happening in my life and in the country.  Some people can do that with top 40 songs on the radio, for me it’s SI covers.

You get the picture.

The college football cover arrived a week after Ryan and then the Tommy Mason football cover which included colorful pictures of AFL runners Mike Garrett, Clem Daniels, Bobby Burnett and Jim Nance.  The AFL was not the league of choice to be covered by SI and much has been chronicled about the conspiracy theorists claims that the magazine was bias.  To be sure the ABA experienced similar treatment as did the NASL, WHA and currently the MLS and WNBA.  But hidden within the confines of SI offerings back in 1968 was the most amazing article I have read over the years since my parents gave me with that first subscription.

While head SI football writer Tex Maule either ignored or ridiculed any existence of the AFL, Edwin Shrake embraced it.  And on December 9, 1968, his article that accompanied the Joe Namath cover, in my opinion, is the best AFL article ever.  My friends called it a fairy tale and in fact the article’s subtitle presented it as a fantasy.  But as the events of the football season unfolded in the weeks to come, Shrake’s fantasy would become the reality that shook the world of sports and changed its landscape forever.

A CHAMPAGNE PARTY FOR JOE AND WEEB (see link to the article below) described how the Jets would beat the Raiders in the AFL championship game and then go on to beat the Baltimore Colts in Super Bowl III.  It appeared three weeks before the end of the season, when much about the post-season picture in both leagues was still out of focus and the race in some divisions was still a toss-up. 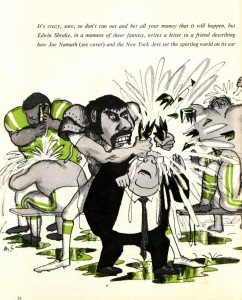 In a mythical letter to a friend who was in Brazil recovering from a plane crash and missed the final weeks of the football season, Shrake described the events that led up to the historic Super Bowl.  How the Chiefs (10-2) beat Houston on Thanksgiving giving the Jets the Eastern Division title while they watched the game on TV. Then, as Oakland sat at 9-2 and San Diego at 8-3, Shrake wrote that the Raiders would capture the Western title.  But before going to press on December 2 and three games before the season ended there was still a very real possibility that any one of the Raiders, Chiefs and Chargers could rise to the top of the division either alone or season ending tie.

He also wrote about how Oakland survived three difficult games in a row to end the season, including the playoffs.  How did he know?  With Kansas City and Oakland tied with 10-2 records the Chargers at 9-3 trailed by only a game on December 2.  The picture in the West was still quite murky as to who would emerge as the division winner and the Chargers still had to play both the Chiefs and Raiders.  Writing about Oakland winning a playoff to get into the championship game was the creative genius of a visionary.  Three weeks later the playoff game he wrote about Oakland winning took place, and Oakland did win.

As I remember reading Shrake’s article in real time I was intrigued with his description as to how the Jets would pull this whole fantasy off; all the way down to describing the icy, frigid temperatures, gusting wind and snow piled around the edges of the field for the AFL championship game.  I watched it, and those were the exact conditions that existed on game day, December 29.  He also described how Don Maynard beat George Atkinson on a deep skid-and-go in the second half for a 73 yard touchdown.  Although it did not go for a touchdown, Maynard did beat Atkinson on a skid-and-go, over the Shea Stadium pitcher’s mound, in the fourth quarter for 58 yards that set up his six yard TD reception on the next play.  Eerie! Once before Sport Illustrated had published a mythical Super Bowl game when Tex (NFL) Maule wrote about The Ball Game That Never Was in the November 16, 1964 issue, describing how Gary Cuozzo, Baltimore’s second-string quarterback, passes to Ray Berry for the final touchdown in the Colts 48-7 landslide win over the Buffalo Bills. Complete, and in typical Tex Maule style, with details of every AFL short coming and every NFL strength.  Most readers saw that article as realistic fiction while Shrake’s Champagne offering was a fairly tale.  Shrake’s fantasy article ended with the Jets beating Baltimore 27-21 in the Super Bowl.  The score may have been bit off, but the outcome of his bold fairy tale prediction was the same – Jets 16 – Colts 7.

Three weeks before the AFL picture became clear and six weeks prior to Super Bowl III, Shrake had it all in focus, a clear picture of what was going to happen over the next month and a half.  If you were an AFL fan and read the article as I did during that first week of December, you were re-invigorated, you continued to dream, wait and hope that his story would materialize.  And if you read it after January 12, 1969 for first time, you would be requesting more articles by Edwin Shrake, hopefully around Kentucky Derby time. 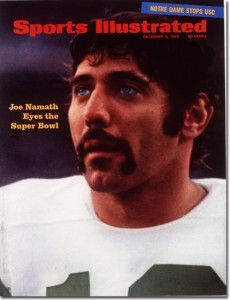 Here’s you invitation to The Champagne Party: ENJOY! http://sportsillustrated.cnn.com/vault/edb/reader.html?magID=SI&issueDate=19681209&mode=reader_vault