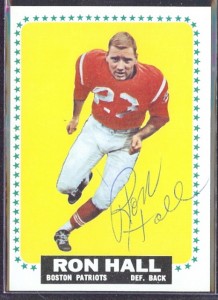 Defensive back, Ron Hall, was drafted by the Pittsburgh Steelers in teh 28th round of the 1959 NFL draft.  He played two games with the Steelers, adn logged one interception.  He signed with the Boston Patriots in 1961, and became a fixture in their defensive backfield through the 1967 season.  In seven seasons with the Patriots, Hall intercepted 29 passes, and ran one back for a touchdown.  He was a member of the 1963 AFL Eastern Division All-Star Team, and was chosen as a member of the Patriots All-Decade 1960s team.  Ron Hall recently responded to some questions about his career.

AFL – Talk about the transition from college to the professional game.  Which was more advanced when you first arrived in 1960?  Why?

RH – I was a small college player – this was much faster and harder-hitting – a lot to learn.  I enjoyed the competition.

AFL – What was your reception like in Boston?  Were fans quick to embrace the Patriots?

RH – My reception in 1961 was great.  The fans were dubious but willing to be patient.  Many fans and I became close friends.

RH – My single proudest moment in football was winning the 1963 Eastern Div Championship in the play-offs at Buffalo.

RH – The NY Jets and KC Chiefs were the most challenging to me personally – Len Dawson & Joe Namath.  The team that I feel I had the greatest success against is the Buffalo Bills and Jack Kemp.

RH – The most difficult part of leaving pro football was missing the camaraderie of my teammates.

RH – The hardest collision I was ever involved in was vs Buffalo in 1963 – Cookie Gilchrist…a hit he later mentioned in a Sports Illustrated article about him.

RH – The most impressive defensive player I saw was my own teammate, Nick Buoniconti, and on offense – Lance Alworth, San Diego.

AFL – Critics of the AFL say that none of the early AFL teams could compete in the NFL.  Would you agree?  What do you feel was the first AFL team that could have succeeded against NFL competition?

RH – I don’t agree with the critics who say that the early AFL teams could not compete in the NFL.  The 1966 Chiefs and  Jets could certainly have competed with the best in the NFL.

AFL – Any other comments?

RH – I truly enjoyed playing pro football and I’m quite proud that I had the opportunity to do so.  I met some wonderful people and made friends that I truly enjoyed and today, have close relationships with a number of them.  I appreciate all those people who played a role in enabling me to “live the dream”.  I feel blessed to have had the opportunity.  In addition. I met my wife, Jayne, of 49 years,  in Boston!