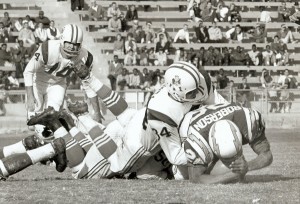 Chuck Shonta (34) tackles the running back, Bo Roberson, of the Chargers in a 1961 game at Balboa Stadium.

Defensive back, Chuck Shonta, came to the Boston Patriots from Eastern Michigan in the 1960 AFL Draft.  Shonta was one of the hundreds to participate in the first Patriots training camp, and earned a spot in the defensive backfield that he did not relinquish until his retirement after the 1967 season.  In 105 games, all with the Patriots, Shonta recorded 15 interceptions and one fumble recovery, which he returned for a touchdown.  He was a member of the AFL Eastern Division All-Star Team in 1966, and was named to the Patriots All-1960s team.

Chuck Shonta recently took some time to participate in an edition of Email from the AFL.

AFL – Please describe the first Patriots training camp in 1960.  What was the competition like?  What are your strongest memories from that camp?

CS – The first training camp in 1960 was very hard – two a days, full pads and meeting morning, noon, and night.  Competition was very intense and along with that, my strongest memories from that camp were all the players that came through the camp.  Five hundred came and went.   A player would come in the morning and in the afternoon he would be gone.

AFL – Talk about the transition from college to the professional game.  Which was more advanced when you first arrived in 1960?  Why?

CS – I would have to say that the transition was more advanced in the pros because of competition, plays that needed to be retained and pro football was seven days a week, 12 hours a day.

AFL – What was your reception like in Boston?  Were fans quick to embrace the Patriots?

CS – Fans in Boston did not embrace us at first.  It took three or four years before we felt like Boston wanted us in Boston.  Prior to the AFL, Boston loved the N.Y. Giants and would watch them over our games.

CS – My proudest moment came in 1960 against the  N.Y. Titans.  On the last play of the game, I picked up a fumble and ran 56 yards for a touchdown. I was on the 20 yard line when the gun went off.  It was the Patriots first win in the AFL.  I just found out that was a record for 52 years as the longest touchdown as time ran out to win a game.  That record was broken last year by punt returner who went 60 yards as time ran out and scored a winning touchdown.

CS – I feel the San Diego Chargers presented the most challenge for us.  We had a tough time beating them.  I probably had my best games  against Art Powell.  For some reason, I could cover him rather well.

CS – The most difficult part of leaving pro football was leaving my teammates and the way I had to retire.  I did not have time to say goodbye.

CS – The hardest collision I ever had was with Cookie Gilchrist of the Buffalo Bills.  On the first play of the game, Cookie came around the corner and I came up and he hit me right on my forehead right between my eyes.  I was out for 10 minutes on the bench and when I woke up, they put me back in the game and I don’t remember the next play.

CS – On offense, it had to be Joe Namath.  I think he could have been the greatest ever if he had good knees.  On defense I feel Nick Buoniconti was the toughest linebacker I ever played with or against.  Nick was fast and could hit hard and cover on pass defense.

AFL – Critics of the AFL say that none of the early AFL teams could compete in the NFL.  Would you agree?  What do you feel was the first AFL team that could have succeeded against NFL competition?

CS – At first we were probably not on par with the NFL.  As the years went on, we could see that the AFL was growing strong because in every training camp, we saw less and less NFL cuts coming to training camp.  I think the San Diego Chargers in 1963 and 1964 could have had success against any team in the NFL.

CS – Prior to football, I received my teaching degree and had taught for one years.  After football, I went back to teaching and taught for 33 years.  I was also head football coach for eight years.  I retired in 1994 and now spend my time at our place up north in Michigan on Lake Huron.  In the winter, we travel and especially like cruises.

CS – I would advise current players to enjoy football because the end comes to fast.

CS – It was a great experience and I would not trade it for the world or the money they get today.