Email from the AFL – Exciting Moments

Email from the AFL – Exciting Moments

I recently emailed a single question to some former AFL players.  What was the single most exciting moment during your years in the AFL, and what made it so?  Two of the responses, I thought, were particularly moving, and mentioned the players parents.  So in honor of Father’s Day (a day late), here is the newest installment of Email from the AFL. 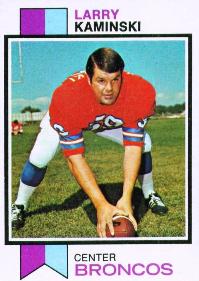 I guess the most exciting day for me in the AFL was when we were selected as the first team to play the mighty NFL Detroit Lions in an exhibition at the 20,000 seat Denver University stadium.  The stage was set with Cookie Gilchrist in the backfield as a monster full back, with a young Scotty Glacken at QB.  We were supposed to be beaten to a pulp, embarrassed, and put to rest versus the mighty NFL Lions.  However, we had a good, tough game, with the offensive line making way for Cookie and giving great protection to the quarterback,  along with a tough defense.  Alex Karras had said he would walk back to Detroit if they lost…  We sent over a pair of tennis shoes to the locker room post game.

I was raised in Cleveland during the Jim Brown era, and it was a dream come true for a second-year player to be introduced and get ready to play the NFL.  My dad was mad that I went to the AFL, but I learned to add early in life, and the $12,000 contract offered by Art Modell was not the $17,500 plus $3,000 bonus offered by the Broncos.  So here I am in the big leagues, and we beat the Lions, and what made it better is that the next week we beat the Purple People Eater Minnesota Vikings…  What NFL?  Great memories…  Larry Kaminski – Denver Broncos – 1966-1973 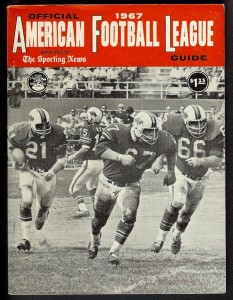 This is a very hard question to answer as there were so many exciting things for a country boy from Arkansas.  Getting to play in the AFL Championship game against Kansas City, and knowing that if we won we would be playing in the first Super Bowl Game against the Green Bay Packers.  We did not win, which was my biggest disappointment also, even though I had a good game.  But there were many exciting things.  I couldn’t believe I was actually getting to play pro football.  For a kid who grew up in Arkansas, on a family farm, that never traveled anywhere, and one week I am playing in New York City, the next week in Miami, the next week in Boston, the next week in San Diego, the next week in Denver…   How exciting was that?  Many take that for granted, but that was just fantastic for me.  I flew my parents to New York City for one of our games, and just seeing them walking around in Manhattan was worth everything.  They got to sit in a box with Johnny Carson…   Are you kidding me?– Bobby Burnett – Buffalo Bills & Denver Broncos – 1966-1969
By Todd Tobias|2012-06-18T06:32:41-07:00June 18th, 2012|American Football League, Bobby Burnett, Buffalo Bills, Denver Broncos, Larry Kaminski|19 Comments