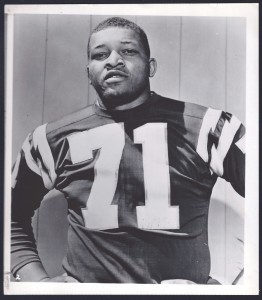 Ernie Ladd in a 1960 Chargers jersey.

I recently picked up this photo of Chargers defensive lineman, Ernie Ladd.  Ladd has always been kind of a mythical AFL figure, with his size, boisterous personality and wrestling career all adding to the total package.  I liked this particular image because although it is undated, it must have been taken early in Ladd’s time with the Chargers.  Rather than wearing the #77 that he did in San Diego, Ladd is shown in a #71 jersey, which I took to mean that he was using it either strictly for a photo opportunity, or it was his practice jersey.  As a means of cutting costs, AFL teams often practiced in their game uniforms from the season before.  In this instance, Ladd’s #71 is a 1960 Los Angeles Chargers jersey, probably worn during games by defensive lineman, Dick Chorovich. 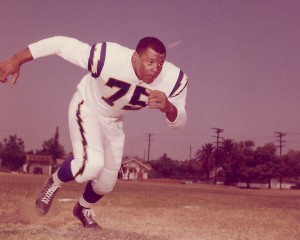 The 1960 Chargers uniforms are unique in their history because it is one of just two seasons in which they wore a dark blue bolt, instead of their standard gold bolts (1966 being the other season).  The 1960 bolts are even more unique in that they had a thin, gold outline.  The outline can be seen more easily in the photo of Ernie Wright (click to enlarge the image). 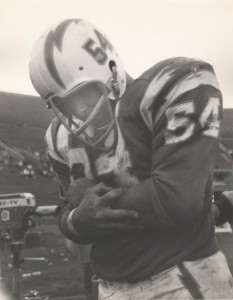 The gold-lined blue bolt also appeared on the Chargers helmets in 1960.  Several years ago, I recall some research being done to confirm this fact.  It was determined to be so after scanning many black and white Chargers images from 1960.  To my knowledge, a color image featuring the 1960 Chargers helmets has not yet surfaced.  I have several (and have seen more) color Chargers images from that inaugural season, though none of them feature a helmet.