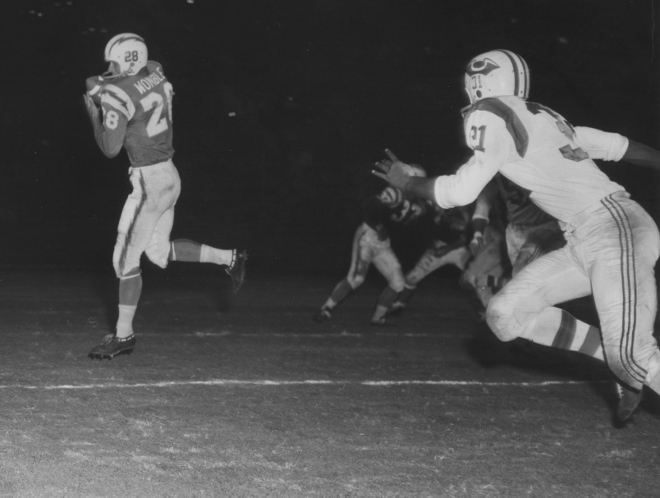 Royce Womble catches a pass for the Chargers, while Clyde Washington prepares to make the tackle for the Patriots.

For many years, the Boston and later New England Patriots sported the beloved Pat Patriot logo on the sides of their helmets.  However, AFL fans going way back remember that there was something that once graced the sides of those classic white helmets prior to Pat Patriot.  For the 1960 season alone, the Patriots wore a much-forgotten “tri-corn hat” logo on their helmets.  I found an article about the inspiration behind the tri-corn logo in a 2009 article by Adrianna Borgia on the Boston Magazine website.  Take a look!

In celebration of the American Football League’s 50th birthday, on 9/14 the Patriots will sport what’s being billed as their original helmet design, featuring Pat Patriot. But even as Flying Elvis (as the team’s current stylized logo is known) rides the bench, Pats purists might call for pulling the burly Revolutionary War jock, too, in favor of his long-lost predecessor: a humble tricorn that adorned team helmets for the inaugural 1960 season.

The simple blue logo was the brainchild of Walter J. Pingree, a railroad conductor and former semipro player from Somerville. Upon learning New England was finally getting a pro team, he was so pleased to be rescued from the indignity of rooting for the New York Giants that he set out to design a suitably patriotic helmet

Scrapping his first attempt—a “76” ringed by stars that he judged too similar to the new Dallas logo—the amateur artist settled on a Revolutionary War soldier’s hat. He submitted the idea to team owner Billy Sullivan in a package that included four slightly different designs (the winner is pictured at right; all are preserved in the archives of the TD Garden’s Sports Museum) and a letter offering free use of them that concluded “you can count on me to root the team on, win, lose, or draw.” Though Sullivan loved Pingree’s concept and later made him something of an unofficial team member—lifetime season tickets, invites to private team meetings—he decided to switch to Pat Patriot, inspired by a 1959 Globe editorial cartoon, at the close of the first season. Most of the evidence of Pingree’s design disappeared soon after: To avoid buying new helmets, Sullivan had the tricorn logo peeled off and replaced with Pat.