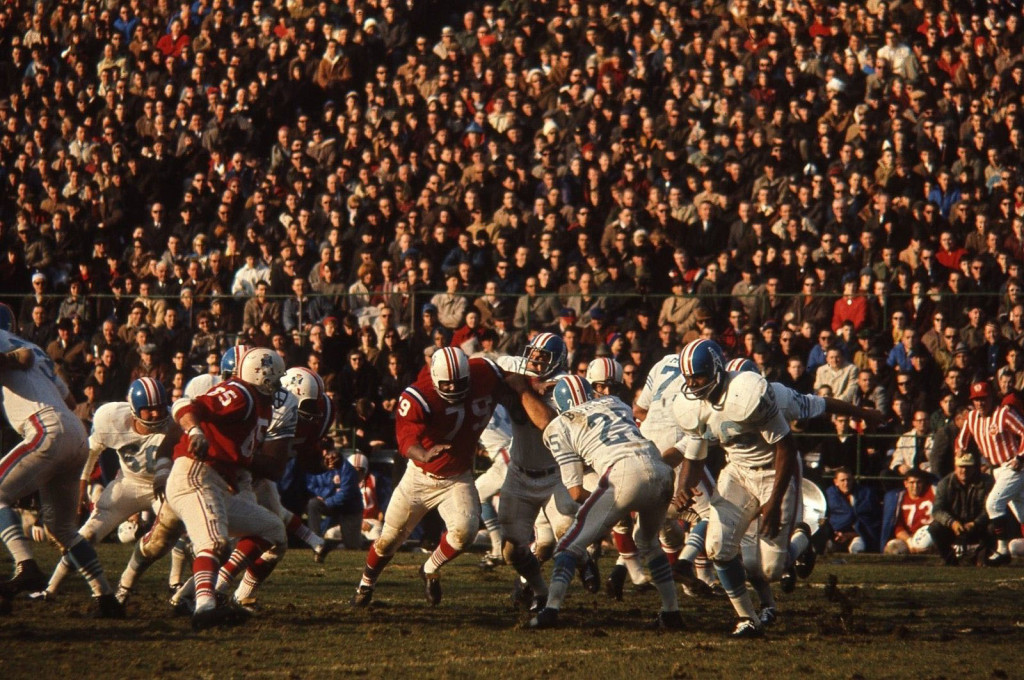 As I mentioned with the Fred Arbanas and Frank Buncom image last week, eBay has been a great source for quality, color AFL images lately.  I have picked up several, with this being one of my favorites.

Since first learning about him, I have had an interest Jim Lee “Earthquake” Hunt.  I am not exactly sure of the source of my interest; maybe it is that he had such a cool nickname – they say the ground rumbled when he rushed the quarterback.  Perhaps it is because he is one of just 20 men to play all 10 seasons of the AFL.  Or it could be that because he passed away so young (on November 22, 1975, at the age of 37), he is the least-known of the Patriots line that included Bob Dee, Larry Eisenhauer and Houston Antwine.  Regardless, Hunt is sadly overlooked by those outside of the Patriots fan base.

‘Quake looks just awesome in this image, blowing past the Oilers offensive line, shoving aside a Houston lineman with a single forearm.  I can just imagine the “oh shit” look that must have been on Ode Burrell’s face at the moment this photo was taken.  It is difficult to tell if Burrell is carrying the ball or is set up to block, but he is in for a collision, regardless.

Of course there are other details that add to the richness of the image.  Check out Billy neighbors (#73).  Is he sitting in one of Fenway Park’s dugouts?  Like other AFL stadiums, the fans were right on top of the action in the football configuration at Fenway.  Pat Patriot is shown in full splendor on the side of Nick Buoniconti’s helmet (#85), and the oil derricks on the side of the Houston helmets are classics.

This image is from a game played on November 6, 1964, which the Patriots won with a fourth-quarter field goal by Gino Cappelletti.  You can see the full box score HERE.