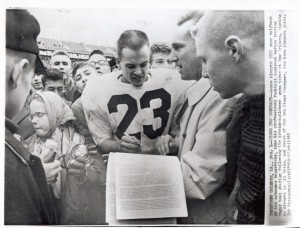 Lance Alworth and Al Davis are two of the more important individuals in AFL history.  Alworth, a flanker out of the University of Arkansas, has been called the AFL’s first true superstar.  A fast and agile receiver with a wonderful set of hands, Alworth led the league in receiving in three separate seasons, and caught a pass in 96 consecutive games.  Al Davis began his AFL association as an assistant coach with the Chargers.  He left San Diego in 1963 to become head coach and general manager of the Oakland Raiders.  He later took over as the AFL commissioner, and then ultimately returned to Oakland as the Managing General Partner of the Raiders, a position he held until his death in 2011.

Alworth and Davis had a special connection.  Davis had scouted Alworth for the Chargers, and was his first position coach when Lance arrived in San Diego.  When Davis left for Oakland, one of his tasks was to find a way to get coverage on Alworth when the Chargers and Raiders faced off two times each season.  Though they had become inter-divisional rivals, the two remained close.  When Alworth became the first player from the American Football League to gain entrance into the Pro Football Hall of Fame in 1978, he asked Al Davis to be his presenter.

These two photos, above and below, represent the beginning and end of Alworth’s time in professional football.  The first shows Davis signing Alworth to his first professional contract, under the goal posts and just minutes after the end of Lance’s final collegiate game, the 1962 Sugar Bowl.  The second photo show the pair again, some 16 years later, when Lance was inducted into the Pro Football Hall of Fame. 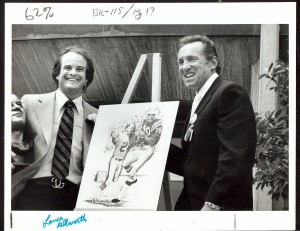