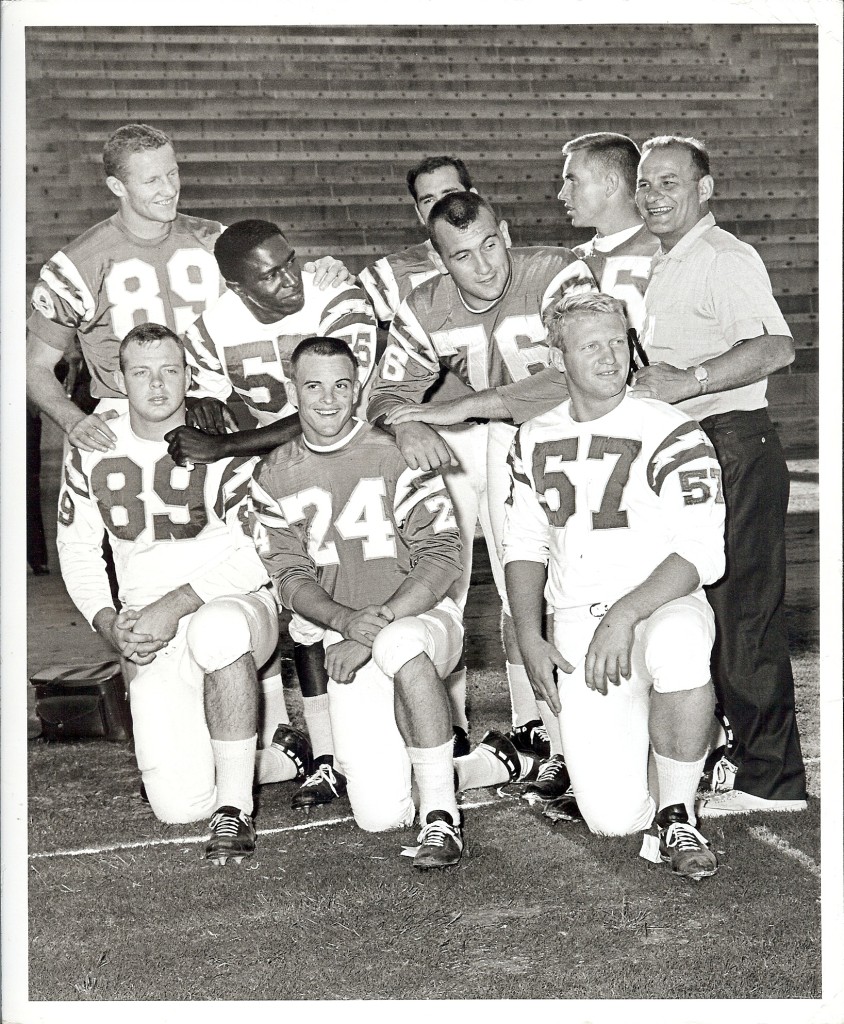 Now that the American Football League is more than 50 years old, there are a good number of football fans who are not old enough to have their own AFL memories.  As a result, we “youngsters” are at the mercy of whatever documentation was done so many years ago.  Fortunately, football has always been a spectacle, and as a result, has been widely photographed throughout the years.  The AFL was no different, with both amateur and professional photographers capturing forever these moments in professional football history.

One of my favorite all-time AFL images, shown above, was taken by San Diego Chargers team photographer, Charles Aqua Viva, on August 4, 1962.  The image shows head coach, Sid Gillman, happily standing over several of his young Chargers players.  The grouping, while not strictly posed, is not completely informal either.  It appears as though Aqua Viva snapped the shot secretly, just moments after getting the men arranged in the pose that he had desired.

In actuality, the group of players, at least those standing loosely posed, is rather significant.  Seven of the eight pictured represent the bulk of the Chargers 1962 Draft Class.  And these are not run of the mill draftees, but the group that had just arrived to Chargers camp after having played against the Green Bay Packers in the College All-Star Game.  This group, which was just then beginning their lives as professional football players, appear to still have that big man on campus swagger, having yet to face the challenges of AFL competition.

#89 Bob Mitinger was an All-America linebacker out of Penn State. He played several season with the Chargers, during which he also attended law school at the University of San Diego.  After his football career came to an end in 1968, he went back to Pennsylvania to embark on his new career as an attorney.

#24 Lance Alworth – Not yet wearing his famed #19, Alworth overcame an injury-riddled rookie season to become the AFL’s first superstar.  “Bambi,” as he was dubbed by teammate Charlie Flowers, became the first player from the AFL to be inducted into the Pro Football Hall of Fame when he was voted in as a member in 1978.

#57 Wayne Frazier – Frazier saw playing time with the Chargers, Oilers, Chiefs and Bills between 1962-1967.  As a member of the Chiefs in 1966, Frazier was the starting center in Super Bowl I.

#89 Reg Carolan – At 6’6″ and 236-lbs., Carolan was threat as a tight end.  Like Frazier, Carolan played for the Chiefs after leaving the Chargers, and was also a member of the Super Bowl I team.  Carolan retired from the game in 1968.

#55 Frank Buncom – A linebacker out of USC, Buncom was perhaps the quietest of the group, but he hit like a loaded dump truck on the field.  Buncom was a three-time AFL All-Star with the Chargers, before leaving for Cincinnati in the 1968 expansion draft and becoming an original Bengal.

#78 Dick Hudson – Drafted in the second round out of Memphis, Dick Hudson played only one season in San Diego before being traded to Buffalo in 1963.  He stayed in the league through the 1967 season, and won AFL championships with the Bills in 1964 & 1965.

#21 John Hadl – Hidden in the back is the man who threw the hundreds of passes that Lance Alworth caught.  Hadl had a long and distinguished career in the AFL & NFL before retiring from the game in 1977.

Joining the incoming rookie class is #15, future Congressman, Jack Kemp.  Within months of this photo being taken, Kemp broke his finger, and was lost to the Chargers when the Buffalo Bills scooped him up off of waivers in rare mistake made by Sid Gillman.  Kemp led the Bills to back-to-back AFL championships over the Chargers in ’64 & ’65, before ultimately retiring from football and embarking upon a life in politics.

They say that a picture is worth a thousand words, and rightfully so.  Looking back on this moment in history, you cannot help but be excited for all of the accomplishments yet to be made by the these strong, young men.  But as the years pass, the accomplishments are achieved, and then gradually a sadness begins to set in.  As I look at that photo, I see the young men, but with the knowledge that they are no longer young.  Frank Buncom was the first to go.  He passed away in 1969, the shocking victim of a pulmonary embolism suffered at the age of 29.  Reg Carolan was next; he died while jogging in 1983.  Then Sid Gillman (2003), Bob Mitinger (2004), Jack Kemp (2009) and most recently, Wayne Frazier (2012).

These heroes of the girdiron are leaving us all too soon.  Thankfully, we have maintain their photos, stories, and memories.  We will Remember the AFL.