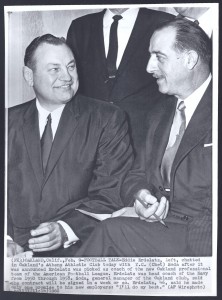 OAKLAND, CALIFORNIA – February 9, 1960 – FOOTBALL TALK – Eddie Erdelatz, left, chatted in Oakland’s Athens Athletic Club today with Y.C. (Chet) Soda after it was announced Erdelatz was picked as coach of the new Oakland professional team of the American Football League.  Erdelatz was head coach of the Navy team from 1950 through 1958.  Soda, general manager of the Oakland club,said the contract will be signed in a week or so.  Erdelatz, 46, said he made only one promise to his new employers: “I’ll do my best.” (AP Wirephoto)