A book is currently being written about former Chargers linebacker, Frank Buncom.  Lee “Buzz” Ponce, a one-time ballboy for the AFL Chargers is authoring the work.  Ponce has kindly offered up a chapter of the book for our enjoyment on Tales from the American Football League.  The Sports Illustrated article to which Ponce refers can be found HERE.

A remarkable insight into the American Football League and professional sports can be found in a primordial Sports Illustrated article from September, 1968. It’s noteworthy on several levels:  how it still resonates even today in portraying the delicate balance between player salaries and team chemistry, and how it captures the mood of professional sports long before the advent of free agency and multi-million dollar player contracts. 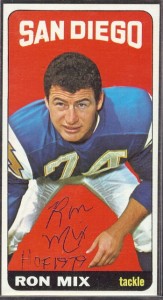 The piece was penned by none other than Ron Mix, the ostensible Intellectual Assassin who, as well as earning Hall of Fame honors as a player with the San Diego Chargers, was and is a skilled writer, authoring articles for other magazines throughout the years in addition to Sports Illustrated.

When Mix and I met for lunch in the spring of 2012 to discuss his former teammate Frank Buncom and what may have made Buncom special, he told me to find this article. “There’s a lot of information there about Frank that really sums up the guy,” as he put it.

In fact, I was already very familiar with the story, having first read it all of those years ago when it debuted in Sports Illustrated. Through the years I kept a tattered copy of the magazine, later abandoning the printed version in favor of an on-line account.

Titled, “The Two Man Union That Failed,”   Mix correctly portends the future growth of the NFL Players’ Association and player strikes in professional sports. In a droll style, he summarizes a brief team walk out during training camp by himself and Buncom over their salary demands to Chargers general manager and Coach Sid Gillman in 1965. He goes on to explain in earnest, the need for effective union leadership in professional football.

The article – far ahead of its time — was a persuasive plea for clear heads to prevail in the future labor wars of professional sports. In one passage, Mix articulates his case like the lawyer he is. “The professional football player has become convinced that he deserves to share in the profits of an industry in which he is the movable part that wears out, that it is fair to attempt to translate the pain of a broken bone, of exhaustion, into money. There should not be any ceiling placed on player benefits—as the industry prospers, the players should prosper in kind.”

As impressive as the article was in dissecting labor strife in pro football, it was Mix’s description of Frank Buncom and his role in the short-lived walk out from the Chargers that held my rapt attention as a 20 year-old college kid, and still speaks volumes today regarding Buncom’s make-up and demeanor.

In his story, Mix recounts Buncom as disciplined and honorable, with a healthy dose of good humor. “You see, Frank is committed to a set of principles, and he doesn’t adjust them to conform to a trying situation. He has emulated the great Cyrano de Bergerac, his favorite literary character, to such an extent that he enjoys the lightness of interjecting him in everyday conversation. For instance, if one asked Frank what he had for dinner he was likely to say, ‘a grape…a glass of water and half a macaroon.’ And please don’t ask him why he doesn’t yield in his contract demands lest you find yourself on the receiving end of Cyrano’s famous ‘No thank you’ speech.”

In an extraordinary passage that frames the mind and attitude of Frank Buncom in just a few words, Mix writes, “More and more, Frank did not like the part where we walk out, though he had originally suggested it. He had not entirely made up his mind that he would be resolute in his retirement threat if our terms were not met, so our plan had a touch of dishonesty which he did not like. And, that existing, he did not think he could be very convincing. I assured him that our line of argument was so reasonable that Sid (Gillman) would reach an agreement with us and we would never come to the part where we walk out.

‘Okay, then, you do the talking,’ Frank said.

So, we went into Sid’s office. It turned out to be a debacle. Later, we had a good time trying to figure out where we went wrong. Frank decided that I had botched things up by being too nervous. He said that I was sidling so close to him that he had to step away for fear that I would slip my hand into his. Anyway, it did not go well”

In retelling the actual contract negotiation meeting with Gillman, Mix writes, “Coach, we….’ ‘I will not talk to you (says Gillman)’. ‘Well, in that case,’ I said, ‘we don’t have any other choice but to retire.’ And out of the corner of my eye I saw Frank do a slow die. This was not supposed to have happened.

‘That decision is up to you.’ 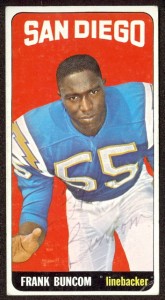 Outside, Frank and I looked at each other and laughed. It was done. Frank made a circle with his thumb and forefinger and gestured at me as he said, ‘Good plan, Ron. I was about to jump in and slaughter Sid with reason, but you were doing so well. Ugh. Are you kidding? I think if we had stayed another minute you would have thrown your arms around Sid and condemned me…”

The two-day bungled camp walk out – effectively a strike, albeit a small one — orchestrated by Buncom and Mix in 1965, was a harbinger of sorts. In the ensuing 40-plus years, professional sports would see dozens of walk outs and strikes by individual players and entire unions, but it was the Buncom-Mix strike/walk out that kick-started the parade. The next year, as a matter of fact, the celebrated one month holdout over salaries by baseball stars Don Drysdale and Sandy Koufax of the Los Angeles Dodgers was world-wide news that caught the attention of everyone from Walter Cronkite to the front pages of the New York Times; the Buncom-Mix walk out paled by comparison in terms of megastars and mega money involved.

So while the walk out by the two Chargers was ground breaking, it could only be called big news in provincial San Diego where it was the lead-in story on local newscasts for several days. It never was the type of above-the-fold newspaper story that attracted national attention such as the Drysdale-Koufax headline grabber for a number of reasons; foremost, the fledging American Football League was still viewed by many – including some major newspaper and magazines — as minor league and too gimmicky, lacking the more hyped stars of the established National Football League. Having two of its better players refusing to participate in drills just didn’t generate fireworks, as compared to the marquee names that would come later. Nevertheless, the impasse with the Chargers did serve as a warning shot for the future of professional sports salaries and labor demands.

For the next several years there were war cries and much chest thumping by both players and owners in pro football, but little progress in terms of solid advancement in labor relations. By 1970 when the merger of the AFL and NFL became effective, the unions for both the AFL and NFL agreed to meet for the first time in January. Though the NFL owners were open to recognizing a union, their representatives requested lawyers not be present during negotiations, something the players were unwilling to consent to.

The players went on strike in July 1970, after the owners locked them out for a brief period. The strike lasted for two days ending with a new four-year agreement which was reached after the owners threatened to cancel the season. As a result the union won the right for players to bargain through their own agents with their teams, and minimum salaries were increased to — get this — $12,500 for rookies and $13,000 for veterans.

Ron Mix’s account of the aborted walk out with his teammate in 1965, accentuates what made Frank Buncom special and unique — virtues which continue to impress and reverberate far beyond the time the piece appeared in Sports Illustrated.

When he wrote, “Frank is one of the kindest, most personable men of my acquaintance, a man with whom I would truly choose to walk through life…,” it struck me over 40 years ago as eloquent and surreal, the same as it does today. Eloquent because of the simple wording that captures the man so well. Surreal because I’ve never clearly understood – and have always struggled to articulate — why Buncom wasn’t celebrated more widely, wasn’t appreciated by a larger fan base, wasn’t more acclaimed.

But I’ve come to accept the notion that if Frank Buncom himself was comfortable with that portrayal, then it must be real, it must be genuine. Indeed, he may very well have echoed his favorite literary figure when it came to seeking out fame, seeking out headlines.