Fire in the Iceman – A Book Review

Home/AFL, Oakland Raiders, Tom Flores/Fire in the Iceman – A Book Review
Previous Next

Fire in the Iceman – A Book Review 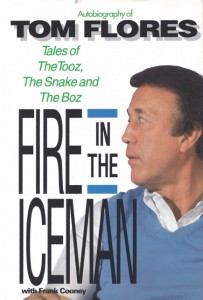 It is not too often that I run across biographies of former AFL players, but I when I do, I always pick them to see what new bits of info I can find.  Frankly, there are just not a lot of them out there.  Beyond several versions of Joe Namath biographies, a few on Al Davis & Lamar Hunt, Jim Otto, Otis Taylor and handful of other individuals, there just isn’t a whole lot available.  But recently I learned about a book called Fire in the Iceman, the autobiography of former Oakland Raiders quarterback and head coach, Tom Flores.  I could hardly say, “no” to a gently-used copy that came my way for 99 cents plus shipping.  It was a nice surprised when I opened the book and found it signed on the inside by Flores.

Fire in the Iceman begins with Flores’ youth, much of which was spent in the field of Central California, where his family got their start harvesting produce on large farms.  From those humble beginnings, Flores blossomed into a fine athlete and quarterback, and worked his way to through the College of the Pacific, and into professional football with the Oakland Raiders in 1960.  He lasted all 10 seasons of the AFL as a player (though he sat out the season of 1962 with tuberculosis), and then embarked upon a successful coaching career in which he won two Super Bowl championships as head coach of the Raiders.

While Tom Flores was an important figure in AFL history, I knew going into this book that it would likely focus more on his time spent as the Raiders head coach.  I was not wrong.  Roughly 53 pages of the 260-page book are dedicated to Flores’ days in the AFL.  It was not a lot, and most of it was not what I would consider in-depth recollections of the period, but it still contained Flores’ first-hand account of Al Davis taking over as head coach of the Raiders in 1963.  I was also happy to read a decent amount about Raiders’ guard, Wayne Hawkins, who I feel is an underrepresented player from the old league.

As is to be expected, the bulk of the book focuses on the period when Flores was head coach of the Raiders.  Being that I grew up a Chargers fan during this period, I enjoyed seeing from a different perspective some of the situations that I recall as a young fan – the Holy Roller, 1980 AFC championship game, etc.  It was also interesting to see the author attempt to discredit the belief that Al Davis ran EVERYTHING to do with the Raiders.  As well, Flores in another in a long line of AFL men (Raiders and non-Raiders alike) who sing the praises of Davis, professional football’s greatest rebel.

Overall I enjoyed the book well-enough.  It was not overly-enlightening, and did not change my overall perception of much, but the material was good and in this day-and-age of the modern and oft-spoiled athlete, it is nice to read about someone who worked his way up from the bottom, and seemed to be a good guy the whole time that he was doing it.